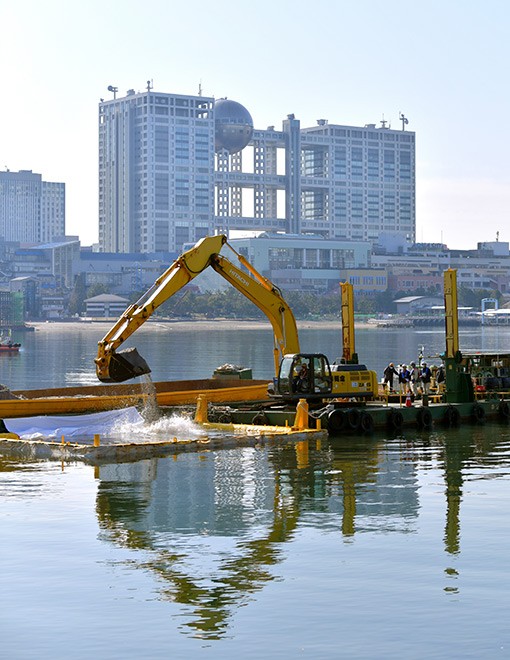 Tokyo hopes the sand will nurture clams and other sea creatures to improve the water quality of Tokyo Bay. Photo was taken in Tokyo’s Minato Ward on Feb. 8. (Takuya Isayama)

Stung by complaints from competitors in a Olympic test event that waters off Odaiba Marine Park "smelled like a toilet," the Tokyo metropolitan government began dumping sand into Tokyo Bay on Feb. 8 to improve the water quality.

The test event for the swimming portion of the Paralympic triathlon was called off after levels of E. coli exceeded acceptable limits.

The park in the capital's Minato Ward is the venue for a number of 2020 Tokyo Olympic and Paralympic water sports competitions, including the triathlon.

The Tokyo government plans to dump about 11,000 cubic meters of sand by the end of March.

The government hopes that the activities of the clams and other living organisms will help naturally purify the water.

A power shovel aboard a vessel dumped 400 cubic meters of sand into the water on Feb. 8.

Dumping is scheduled to continue almost every day until the end of March, and the government is making arrangements to extend it beyond April.

The project utilizes sand that was removed from a seaport on Kozushima island in the Izu island chain during dredging work, according to the Tokyo metropolitan government.