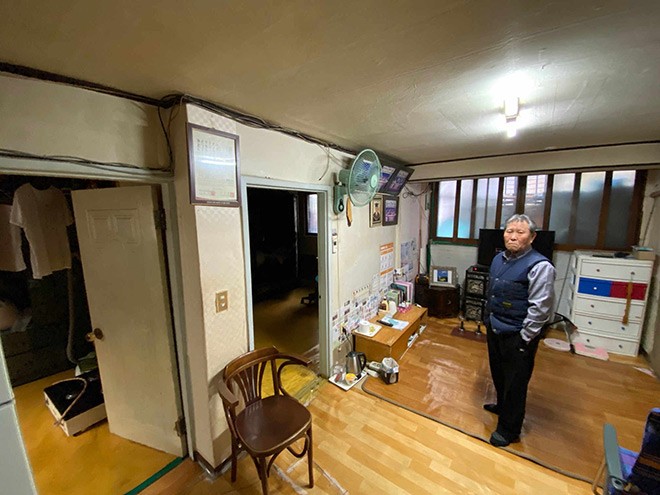 A semi-underground apartment in Seoul does not let in much sun, but the feet of pedestrians can be seen when the windows are open. (Daisuke Shimizu)

The entire Kim family--father, mother, daughter and son--are out of work and living in a dank semi-basement apartment that stinks of mold.

In contrast, the Parks--whose household head runs an IT enterprise--reside in a splendid hilltop mansion.

The main theme of this movie is income inequality. But throughout the film, I personally sensed the presence of North Korea as something like a “countermelody.”

The reality of the North-South division is brought home by Mr. Park’s chauffeur who boasts, “If it’s south of the 38th parallel, I know every single back alley.”

A man laughs at “the ultimate pro-North joke” when the Parks’ housekeeper mimics Pyongyang’s top TV news reader’s cliched pronouncement, “Our beloved comrade Kin Jong Un could not hold back his anger at the malicious and cheap provocation.”

That distinctive intonation and elocution must be the butt of ridicule in South Korea.

Pyongyang’s propaganda machine was quick to seize on “Parasite” to revile South Korean society, declaring, “The film makes people aware that (South Korea) is a rotten, sick society that has a malignant tumor that causes income disparity to grow.”

And North Korea went on to extol itself as “the object of envy of the entire world” as “the nation where every citizen enjoys living in equality.”

I found this inimitable self-adulation even “refreshing,” if I may say so.

Watching the film, I was reminded of the South Korean fad expressions “golden spoon” and “dirt spoon,” which imply that the future of one’s life is determined by the wealth--or lack thereof--of one’s parents.

Of course, it is not only in South Korea that the gap between the haves and have-nots expands inexorably. And that, perhaps, was why “Parasite” has won tremendous acclaim around the globe despite its all-Korean language and setting.

But that said, this is basically a rip-roaring black tragicomedy that is simply enjoyable without reason. I, for one, was totally absorbed in every single scene where the fates of the Kims and the Parks crossed.