Virus testing for 3,000 on cruise ship a logistical nightmare 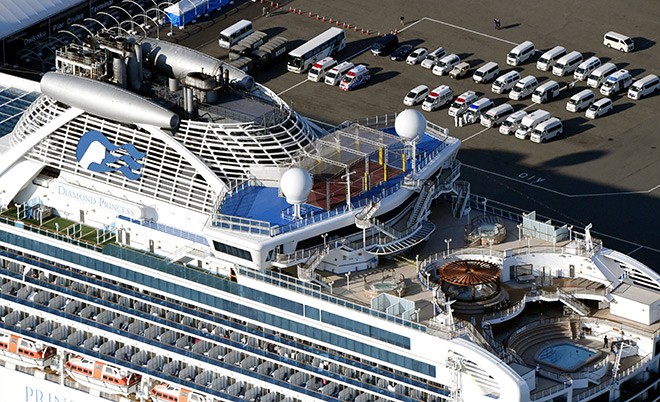 Ambulances wait to transport passengers infected with the coronavirus aboard the quarantined cruise ship Diamond Princess at Daikoku Futo pier in the Yokohama Port in Kanagawa Prefecture on Feb. 10. (Kazuyoshi Sako)

Passengers confined to quarters on the quarantined cruise ship Diamond Princess are at the end of their tether--and their hopes of a quick end to their nightmare are nowhere in sight.

The government said it is considering blanket testing of everyone on board for new coronavirus, even though it would pose a logistical nightmare.

Health minister Katsunobu Kato said Feb. 10 the ministry is giving serious consideration to testing all the passengers and crew members who are living as virtual prisoners on the ship as they are barred from mingling with others on board.

The health ministry placed the ship in quarantine for a minimum two-week period on Feb. 5

Initially, the ministry limited eligibility for taking the test to those with a fever or other symptoms as well as those confirmed to have had close contact with an infected person.

All of the hundreds of returnees from the locked down city of Wuhan in central China who returned to Japan on government-chartered flights took the test.

But the ministry said there are simply too many people on the ship to conduct blanket testing, among other reasons.

The vessel is anchored off Yokohama Port in Kanagawa Prefecture. It was carrying 2,666 passengers and a crew of 1,045.

A succession of new infections among passengers over several days may force the ministry's hand, however.

As of the evening of Feb. 10, 135 people aboard the vessel have tested positive for the virus. Some passengers are demanding to be tested.

“We need to firmly respond to the public's anxiety and concerns,” Kato said at a news conference after a Cabinet meeting. “We want to conduct (testing), if we can.”

The ministry has called on prefectural and municipal public health institutes around the nation, as well as private testing companies and university hospitals, to see whether it is possible to set up a system that allows swift testing of everyone aboard the ship.

The matter has taken on some urgency in light of the rash of new infections and frayed nerves aboard the vessel.

The ministry said about 1,500 people could be tested in a single day if all testing devices kept by the National Institute of Infectious Diseases (NIID) and prefectural and municipal public health institutes were used.

A high-ranking ministry official expressed doubts about the feasibility of the plan, saying: “Testing at private companies will cost a lot. Prefectural and municipal public health institutes have little experience in testing for this new coronavirus. I’m not sure if it is possible to test such a large number of people.”

“As things stand now, it will be really tough to test (all remaining passengers),” he said at a Feb. 10 news conference.

Tetsuo Nakayama, professor emeritus at Kitasato University who specializes in virology and vaccinology, said, “Considering how widely the infection has already spread inside the cruise ship, any of the (remaining) passengers could be infected.”

He agreed that testing everyone on the ship immediately and taking appropriate steps for those who test positive would be the optimum option.

But Mitsuo Kaku, a specially appointed professor at Tohoku Medical and Pharmaceutical University who specializes in control and prevention of infectious diseases, said there was no no need to test every passenger "if infection prevention measures have been taken fully inside the ship.”

However, he conceded that if infection prevention measures were not adequate and every passenger was at risk of being infected, "I see the point of testing everybody.

"The trouble is, no one knows what the case is at this point, so it is difficult to make a judgment,” he said.

‘HOW LONG WILL THIS CONTINUE?’

Fear and uncertainty aboard the Diamond Princess have been rising with the growing number of infected passengers.

“I wonder if the infection spread will ever end,” a 60-year-old passenger anxiously said in a telephone interview with The Asahi Shimbun.

The man, a company employee from the Kansai region, said he learned on the afternoon of Feb. 10 that 65 more passengers had tested positive for the virus. He got the news while browsing on the internet. An announcement on the ship's public address system confirmed the story.

He said his cabin had few spare bed sheets, but he had managed to change the bed. He also cleaned the toilet with a scrub brush kept for that purpose. The man said he received his first medication for chronic diabetes in five days on the evening of Feb. 9.

“How long will this kind of life go on, I wonder?” he said.

A 54-year-old woman who took the cruise with her husband developed a 38.5-degree fever several days ago.

She made an appointment, and waited for three hours in her cabin before being summoned to the medical office on the ship. She then had to wait another 30 minutes.

When she arrived, she found it was packed with passengers complaining of fever.

She was prescribed Tamiflu, and her fever broke. But the situation had scared her as she thought, “I might be infected with the coronavirus.”

She asked to take the virus test, but the medical office said there was no emergency and refused one.

A fellow passenger she met was diagnosed with type A influenza around the same time.

Another acquaintance also developed a high fever but was unable to receive a checkup for a full day.

“The medical response varies from person to person even when they both are running fevers,” the woman said. “Their explanations are inadequate.”

A group of passengers submitted a written request Feb. 9 to health ministry officials staying on the ship.

They sought an improved communications channel to relay what passengers need. They also requested better housekeeping arrangements, among other things.

“The environment inside the ship has been getting worse every day,” said one of the passengers who wrote the request. “I really hope it (the ministry) respond as soon as possible.”

According to the ministry, 29 doctors, 18 nurses and 12 pharmacists were working on the cruise ship as of the evening of Feb. 10.

A lack of medication remains a serious issue.

Based on requests by the trapped passengers, the ministry supplied enough medication to treat about 1,250 people for diabetes, heart disease and other ailments by Feb. 10.

However, medication for about 600 people had yet to arrive.