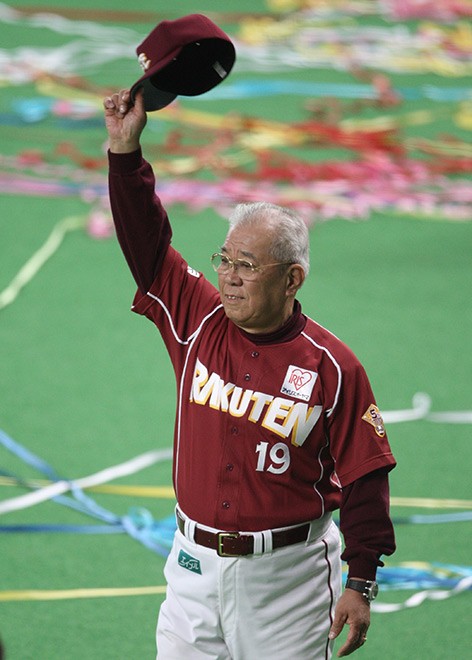 Katsuya Nomura waves to his fans as manager of the Rakuten Eagles when his team lost in the final stage of the Climax Series in October 2009. (Asahi Shimbun file photo)

Katsuya Nomura, a hall of fame catcher who belted 657 home runs and rejuvenated careers through his data-driven strategies as a manager, died of ischemic heart failure in Tokyo on Feb. 11, sources said. He was 84.

Nomura, a native of Kyoto Prefecture, joined the Nankai Hawks, a predecessor of the SoftBank Hawks, in the Pacific League in 1954 as a test player. Just three years later, he led the league in home runs.

And to prove he was not just a slugger, he became the first postwar player to win the triple crown, in 1965.

Despite Nomura’s achievements, his team and the Pacific League in general were overshadowed by the star-studded Central League, which featured such legends as Sadaharu Oh and Shigeo Nagashima of the Yomiuri Giants.

“If Oh and Nagashima were sunflowers, then I would be an evening primrose opening up inconspicuously along the Sea of Japan,” Nomura once said, referring to his hometown facing the sea.

He was also durable. He played in 3,017 games, the second most in Japanese professional baseball history.

As a baseball TV commentator, he won praise for his analyses of pitches based on his long experience behind the plate.

He was elected to the Japanese Baseball Hall of Fame in 1989. The following year, he took over as manager of the Yakult Swallows in the Central League.

Nomura reformed Yakult’s play by analyzing streams of data on the team’s rivals. He was affectionately called the “grumpy grandpa” but was also known as a “regenerating factory” for his ability to revive the careers of players who had been let go by other teams.

With Nomura at the helm, Yakult won the Central League pennant in 1992.

Nomura pushed the Swallows to the next level the following year by defeating the Seibu Lions for the Japan Series title, the team it had lost to in the 1992 championship series.

As a manager, Nomura recorded 1,565 wins over 24 years with Nankai, Yakult, the Hanshin Tigers and the Rakuten Eagles, the fifth most in Japanese professional baseball history.