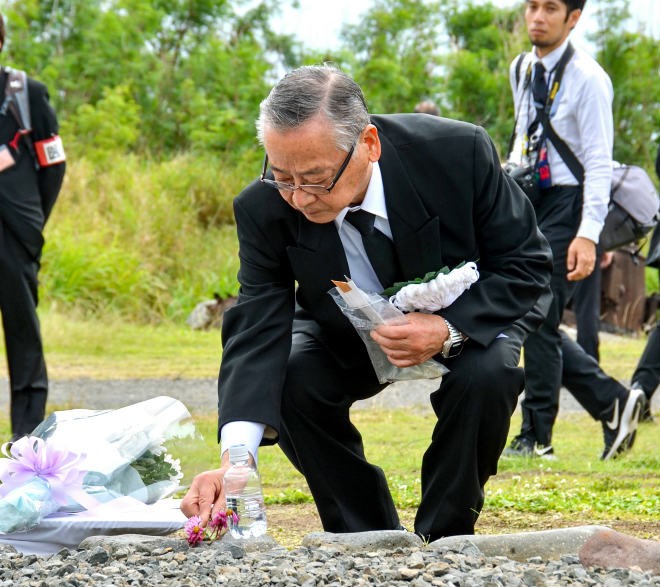 Kentaro Iwai on Jan. 16 offers flowers he picked from his yard at a site on Iwoto in Tokyo’s Ogasawara where many remains of Imperial Japanese Army soldiers have been unearthed. (Hikari Maruyama)

Seventy-five years after Kunizo Iwai fell in the Battle of Iwo Jima, his son, Kentaro, wants to finally bring his father home.

Kunizo Iwai is one of the more than 10,000 Imperial Japanese Army soldiers whose remains wait to be discovered on Iwoto island, also known as Iwo Jima, in Tokyo's Ogasawara.

On Jan. 16, a ceremony was organized by the Tokyo metropolitan government to commemorate the war dead on Iwoto.

“We ask for continued efforts to return remains to their hometowns and families as quickly as possible,” Kentaro Iwai, 75, a representative of bereaved families who is from the capital’s Inagi, said in his speech.

Kunizo Iwai died on the island at age 32 in the desperate fighting, some of the bloodiest in the war.

While Kunizo went to the front when Kentaro was 1 month old, where and how he died remain unknown. Kentaro was simply told by his late mother, Shin, that a survivor described his father as having been “killed by machine gun fire near Mount Osakayama.”

Referring to Shin, who participated in memorial events on Iwoto on many occasions, Kentaro said his mother “likely strongly wanted to know how her husband had died.” Shin passed away two years ago.

The latest ceremony was the first in several years for Kentaro, who allowed his eldest son, Kazuyoshi, 45, to accompany him for the first time.

“I would like to hand down memories of my father, who went through many difficulties and died while worrying about his family, to the next generation,” said Kentaro.

Before leaving his home, Kentaro picked some purple chrysanthemum flowers his mother had raised in her yard. He offered them at the memorial facility on Iwoto and put his palms together in prayer.

“I hope to place my father’s remains--even a single piece--together in my mother’s tomb,” said Kentaro.

However, although their bereaved families want the remains to be returned as soon as possible, the geographical features and landscape on Iwoto have drastically changed since the Battle of Iwo Jima, making them even more harder to locate.

As the identities of discovered remains are difficult to be determined in many cases as well, the government, which is surveying the island, is planning to ease conditions for its DNA analysis from the next fiscal year.

Nearing the end of World War II in February 1945, the U.S. military landed on Iwo Jima. Although the Imperial Japanese Army soldiers fought back while hiding in bunkers, dugouts and caves, 21,900 were killed in the battle.

Following the end of the war, the Japanese government started a project to recover the soldiers’ bones in 1952 on Iwoto. But only 10,000 of the war dead have been unearthed and sent to commemorative facilities and their families, meaning that remains of more than 10,000 have not been retrieved.

According to the welfare ministry, Japan could not stage a full-fledged effort to locate the remains during the U.S. occupation of Iwoto, which lasted about 20 years.

On top of that, the U.S. military fired a massive barrage of shells onto Iwoto before its landing and filled in some dugouts after the war to grow plants and trees, resulting in the drastic alteration of the landscape.

That made it even more difficult to locate any personal items and mementos from fallen soldiers and their remains.

As the airstrip built by the Imperial Japanese Army and expanded by the United States following the war is currently used by Japan's Self-Defense Forces, it is said to be impossible to excavate the ground.

Funding a search effort the past few years through the last fiscal year, the Japanese government studied the entire area on Iwoto again. Radar equipment was also used to search the soil under the runway.

As to a dugout newly found in the survey, the state is expected to carry out additional research in the future.

The enhanced efforts, however, do not necessarily mean that all unearthed remains will promptly be returned to their families.

Whereas teeth and other samples have been collected on Iwoto for DNA testing since fiscal 1999, only those discovered with personal belongings bearing the owners’ names have undergone analysis. In only two such cases, their identities were reportedly confirmed.

Under strong pressure from the bereaved families, the government will relax conditions for DNA examinations of remains from the next fiscal year so that bones will be analyzed based on requests from relatives even when personal effects are not found with them.

How many remains will be identified among 513 samples kept by the state is still unclear, but an official pledged that the government will do its best.

“Given the bereaved families’ advanced ages, we want to return as many remains as possible to them,” said the official.

Heavy snow warning issued for many parts of Tokyo, Tama