VOX POPULI: Philosophical skipper Katsuya Nomura always was one of a kind 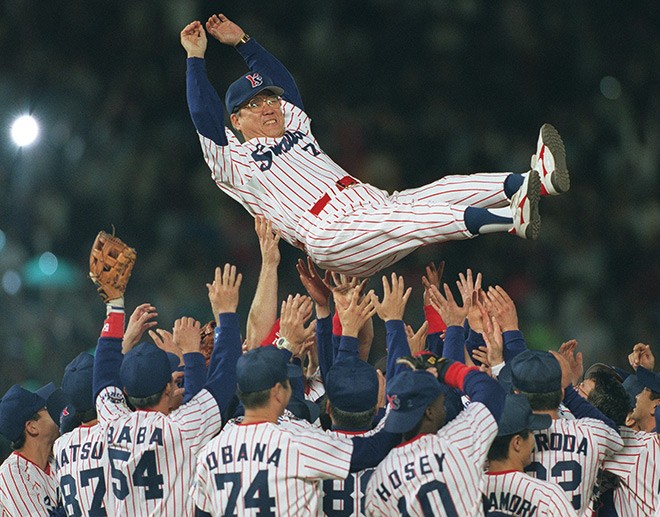 Manager Katsuya Nomura is tossed into the air in celebration of his Yakult Swallows winning the 1997 Japan Series title. (Asahi Shimbun file photo)

In 1954, when Katsuya Nomura signed with the Nankai Hawks (present-day Softbank Hawks), the baseball club's manager said, “I took him in, thinking he’d at least come in useful as a ‘kabe’ (wall).”

In Japanese baseball lingo, the catcher in pitching practice is called the kabe.

Nomura, who died on Feb. 11 at age 84, was born in the fishing village of Amino (now Kyotango city) in Kyoto Prefecture on the coast of the Sea of Japan.

Nomura was only 3 when his father, who was serving on the Chinese front, died of an infectious disease. His mother was of frail health, and life was hard. He could attend high school thanks to his brother, three years his senior, who sacrificed his own dream of going to a university.

In his first at-bat as a pro, Nomura struck out. He played nine games during his rookie year and ended hitless.

The front office hinted at letting him go, but he fought back.

According his autobiography, which he published at age 30, Nomura threatened to throw himself in front of a Nankai Electric Railway train if he was sacked. He even offered to play for no pay.

Unfortunately, I cannot really recall him from his playing days, no matter how hard I try. That's because Pacific League games were rarely televised back then. Nomura tended to be eclipsed by his contemporaries in the more popular Central League, such as the superstars Sadaharu Oh and Shigeo Nagashima of the Yomiuri Giants.

In the number of games he played, as well as in his home runs, hits and RBI records, Nomura ranks No. 2 in history. I wonder if he was destined at birth to make it almost to the pinnacle, but not quite.

Still, as his longtime fan, I must say that he was an extraordinary manager, truly one of a kind. I was particularly impressed by the "magic" he worked to restore has-been players to their former glory, and his baseball theory that came across more like a philosophy of life.

Nomura was a brilliant, resourceful skipper who apparently enjoyed acting like a bit of a goofball.

Later in his life, his wife, Sachiyo, nicknamed Sacchi, was his ultimate support and companion until her death in 2017. Theirs was apparently an “eventful” marriage, but their mutual trust remained rock solid.

Nomura was quoted as quipping, “The secret to a happy marriage is staying away from each other” and “Marital life works better in a home where the wife is tough.”

He certainly left us with some deep, insightful thoughts to mull over.