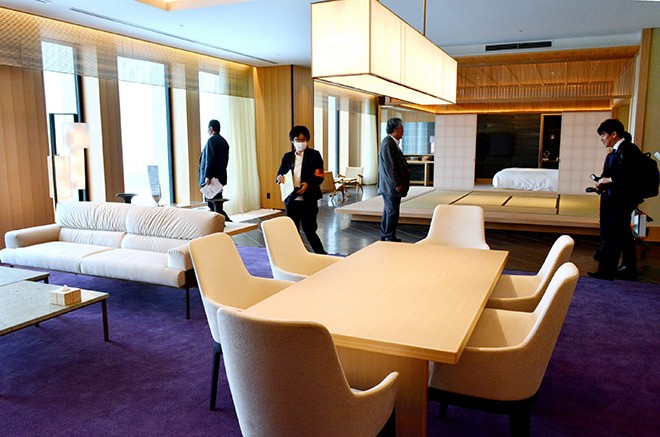 The interior of the high-end Sukiya Suite of the Portom International Hokkaido hotel at the New Chitose Airport in Chitose, Hokkaido (Shuji Shida)

The high-end Sukiya Suite has a floor space of 250 square meters, complete with a Japanese room designed in the Sukiya architectural style, as well as an onsen hot spring bath.

The eight-story hotel, located on the north side of the international terminal, has 171 rooms, all of which offer a view of the airport's two runways.

The hotel's design was inspired by a museum under the concept of "bringing encounters and colors to your journey."

Woodblock prints and ukiyo-e artworks can be found in the guest rooms, the lobby and elsewhere throughout the building.

About 30 pieces of art are displayed in a guest salon on the fourth floor, including a work by famed artist Ito Jakuchu (1716-1800) mounted on a hanging scroll.

The hotel, built by New Chitose Airport Terminal Building Co., is managed by Hekiundo Hotels & Resorts Co., which is entrusted by the airport operator to manage the Air Terminal Hotel at the domestic terminal.

An escalator and an elevator connect the hotel's fourth-floor reception desk to the international terminal's third-floor departure lobby.

Six types of guest rooms are available, starting from the standard Superior rooms with a floor space of 43 square meters, which are priced at 80,000 yen per night.

The hotel also contains restaurants, a cafe, a bar and other establishments.

Due to its convenient location at the New Chitose Airport, Hokkaido's main gateway for air travelers, Vice President Kiyoteru Tagashira said he hopes visitors will use the hotel as a "starting point to go from one airport to another across Hokkaido and enjoy their trips in the region."