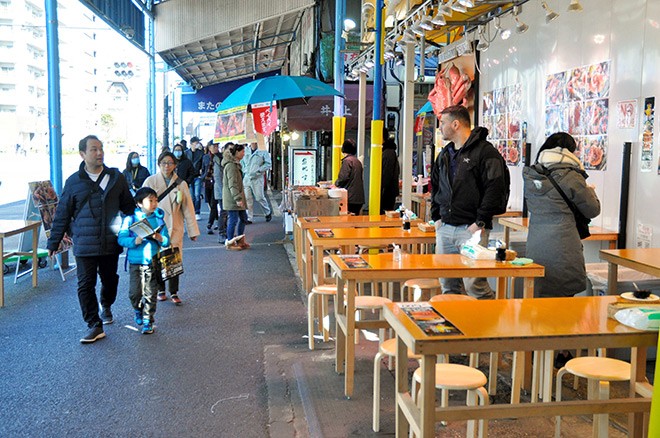 Even at lunch time on a national holiday, many restaurants in the Tsukiji Outer Market of the capital's Chuo Ward had empty seats on Feb 11. (Rihito Karube)

Tourist destinations normally heaving with Chinese visitors have suddenly gone quiet as fears ramp up over the new coronavirus outbreak.

The recently ended Chinese New Year holiday period is normally high season for Japan's tourism industry, but not this year. Sales at shops and restaurants have plummeted due to the virus scare.

"How long will this situation continue?” is a common refrain in the tourism industry these days.

On Feb. 11, a national holiday, tourists were out and about in the narrow streets of the Tsukiji Outer Market in Tokyo's Chuo Ward, but it was rare to hear Chinese being spoken. Usually, the area is packed with tourists, but many restaurants had empty seats--even at lunch time.

Hiroshi Tanabe, manager of a seafood barbeque restaurant, said sales are down by 60 percent compared with their peak.

Half of the 40 seats at his restaurant were empty. Normally, half of his customers are Chinese.

“I pray the situation will return to normal by the cherry blossom viewing season,” Tanabe, 39, said. “For now, we just have to put up with it.”

Miyoko Kondo, manager of a souvenir shop called Mika, observed Feb. 9: “It surely is easy to walk through, isn’t it? Usually I say ‘Xie Xie!’ (Thank you!) to Chinese customers, but they don’t come here now.”

Even restaurants popular among Japanese tourists are suffering.

The manager of a restaurant that specializes in Japanese desserts said that the number of customers had fallen by 70 percent.

“Many of our customers are elderly, and they don’t dare to go to places where they might become infected,” the manager said.

A publishing executive in his 50s who was visiting from Tokyo expressed astonishment Feb. 7 at the lack of tourists.

Hard-pressed vendors in Kyoto said the lack of visitors brought back memories of the good old days.

The manager of a restaurant where 70 to 80 percent of customers are foreigner nationals said: “The number of Western and Chinese tourists has plummeted. Please let this situation end soon.”

The Japan Association of Travel Agents said that about 400,000 Chinese on package tours canceled their plans between the end of January and the end of March.

Factoring in individual and business customer cancellations, the figure is much higher.