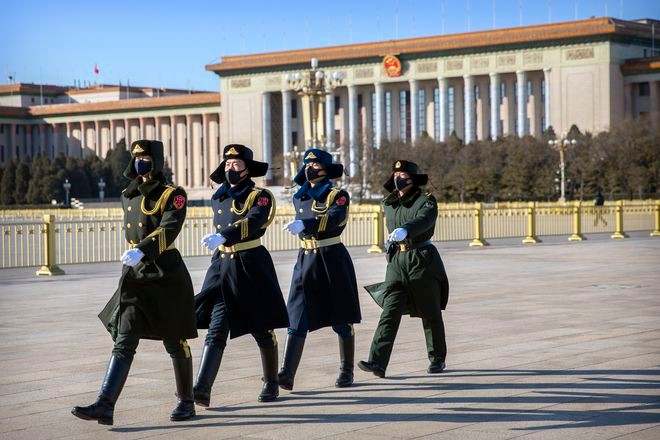 In this Feb. 4, photo, members of a Chinese honor guard wear face masks as they march in formation near the Great Hall of the People on Tiananmen Square in Beijing. (AP Photo)

BEIJING—China's ruling Communist Party needs to make a politically fraught decision: Admit a viral outbreak isn’t under control and cancel this year’s highest-profile official event. Or bring 3,000 legislators to Beijing next month and risk fueling public anger at the government's handling of the disease.

The party was already facing criticism of its heavy-handed censorship, on display during the outbreak, and other social controls under President Xi Jinping, who took power in 2012 and has accrued more political power than any Chinese leader since Mao Zedong.

Now, the new disease named COVID-19 has become the party’s biggest crisis since China’s last outbreak of a mystery disease in 2002-2003. SARS, or severe acute respiratory syndrome, killed nearly 800 people and led to accusations Beijing had endangered the public by hiding the disease to avoid disrupting a party leadership transition.

There is no indication Xi faces any serious challenge to his position, but public anger could give opponents in the ruling party ammunition to push back against his autocratic rule.

“In the long term, I think it will damage him,” said Steve Tsang, director of the China Institute at the School of Oriental and African Studies in London.

But for now, even party figures who might be quite happy to see Xi weakened feel obligated to rally around him, Tsang said. “They will not risk allowing a crisis like this to destroy the credibility of the Communist Party itself,” he said.

Prominent but powerless, the National People’s Congress, due to open on March 5, endorses the ruling party's economic and social welfare plans. The premier and Cabinet ministers hold their only news conferences of the year, while delegates mingle at group meetings and talk to foreign reporters — a potentially explosive mix.

Party leaders worry delegates “might vent their anger and frustration,” said Willy Lam, a political scientist at the Chinese University of Hong Kong.

He said there would likely be “heavy censorship” to make sure angry delegates can’t talk to reporters if the meeting isn't postponed for the first time since the ultra-radical Cultural Revolution of 1966-1976.

The party could postpone holding the gathering to May or later in hopes the outbreak might have abated and the event could be held "without presenting an image that they don’t care how it affects people," Tsang said.

Going ahead with it would contradict Beijing’s intensive anti-disease controls. They have isolated cities with a total of 60 million people and discouraged travel and public gatherings nationwide, disrupting business and imposing mounting economic losses.

China has reported more than 1,100 deaths and over 44,600 confirmed cases, most of them in the central city of Wuhan and the surrounding province of Hubei.

The party has used its monopoly control of media and pervasive censorship controls to stifle criticism online, over the popular WeChat messaging service and through other social media. But it faces grumbling, including in its own ranks, about Xi’s autocratic rule and assertiveness over the South China Sea and other foreign issues that have strained relations with China’s neighbors.

In an essay titled “angry people are no longer afraid,” a law professor at elite Tsinghua University in Beijing criticized “ruling through 'big data totalitarianism’ and WeChat terrorism.”

“Politics is corrupt and the regime is ethically exhausted," wrote Xu Zhangrun in the essay published on China Digital Times, a website in California.

Last year, Xu was suspended from his post and investigated by Tsinghua for criticizing the party’s decision in 2018 to remove presidential term limits from China’s constitution, allowing Xi to stay in office indefinitely.

The party has also faced an outburst of public anger following the death this month of Li Wenliang, a physician in Wuhan who was reprimanded in December for warning about the virus. Local authorities were accused of discouraging doctors from talking about the outbreak to avoid overshadowing Hubei province's major political event, a legislative meeting in preparation for the National People's Congress.

The first cases were reported in November 2002, but the party said the disease was under control. It didn’t declare an emergency until after then-President Jiang Zemin handed over power to Hu Jintao in March 2003 in a once-a-decade transition.

Xi has amassed vast authority after being named party general secretary in 2012, effectively becoming leader for life. He took over as leader of the military and sidelined rivals including the No. 2 party figure, Premier Li Keqiang. Xi appointed himself to head party bodies that oversee economic reform and other important issues.

It was a break with two previous generations of leadership, which were based on consensus among members of the ruling party’s inner circle of power, the Standing Committee.

That has allowed Xi to push through ambitious plans, including the multi-billion-dollar Belt and Road Initiative, to expand trade by building ports, railways and other trade-related infrastructure across Asia, Africa and the Middle East.

But it also makes it harder for Xi to deflect blame. This week, he broke a lengthy public silence about the disease by visiting a neighborhood of Beijing that has had about 340 cases of the virus.

Xi is personally identified with a slew of thorny issues, from Beijing’s tariff war with Washington and prickly relations with Taiwan, the self-ruled island the Communist Party claims as its territory, to anti-government protests in Hong Kong and the mass detention of ethnic Muslim minorities in the Xinjiang region in the northwest.

Xi has appeared to try to distance himself from the latest virus outbreak by naming the premier, Li Keqiang, on Jan. 26 to head the party group in charge of anti-disease work.

The next day, Li flew to Wuhan, met with doctors and nurses and visited a supermarket.

“This looks like an attempt to shift blame to Li Keqiang if progress in fighting the disease is unsatisfactory,” Lam said.