Inclusive Tokyo: Josh has a rare night out in glitzy Shibuya and loves it 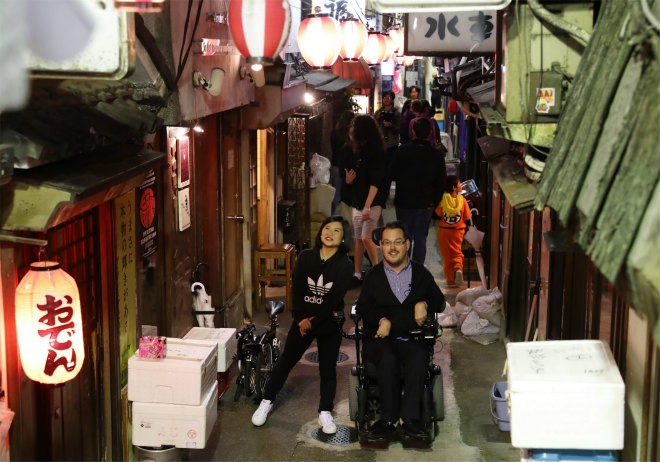 Editor’s note: The theme of Inclusive Tokyo is to explore the metropolis from the viewpoint of wheelchair users and people with disabilities. Tourism officials, with their sights set on the 2020 Olympic and Paralympic Games and an anticipated influx of foreign visitors, are working to make public transportation and popular destinations more accessible. In this series, Barry Joshua Grisdale, a 39-year-old Tokyo resident who uses a wheelchair, navigates iconic locations to assess progress in creating a barrier-free environment.

Tokyo's growing cosmopolitan atmosphere has spurred many funky areas of the capital to promote night tours for foreign tourists.

In the glitzy Shibuya district, best known as a fashion and shopping hub, after-dark tours are gaining a foothold.

Canadian-born Barry Joshua Grisdale, who prefers to be called Josh, signed up for a tour hosted by the Shibuya City Tourism Association to explore the neon-filled streets of Shibuya.

Josh, a resident of Japan since 2007, said he had never visited Shibuya at night and found the experience riveting.

Participants are required to meet up in front of JR Shibuya Station for 90-minute weekday tours that start at 6 p.m.

Josh was greeted by 27-year-old tour guide Mayuka Sugimura, who until 18 months ago worked at a theme park in the United States.

First they headed to an alley called “Nonbei yokocho” (heavy drinker’s alley) where tiny bars are sandwiched side by side in surroundings that evoke memories of early postwar Tokyo.

They had to negotiate the iconic Shibuya Scramble Crossing, always packed with an army of pedestrians, and then go through an underpass where JR trains rattled overhead to reach the narrow alley filled with two-story wooden structures.

The alley dates to around 1951 when vendors operating stalls in the vicinity of Shibuya Station decided to branch out. The layout of the area reflects those roots as each bar and eatery is about the same size as a stall and can only accommodate around 10 seated customers.

Thirty-nine establishments are still doing business in the alley, a throwback to the mid-Showa Era (1926-1989) that is a sharp contrast to the area around Shibuya Station undergoing a redevelopment construction boom.

The next stop was "Center-gai,” a bustling street popular with young people.

Josh looked troubled because the street was laid with cobblestones.

But once he reached the middle of the street, Josh said the rattling didn’t bother him too much.

He said people strolling around with smartphones and not looking where they are going pose the biggest problem for wheelchair users, adding that he always takes care not to bump into pedestrians as his electric wheelchair with him seated weighs more than 100 kilograms.

During the journey, the pair passed by Mega Don Quijote, a general discount chain store that seemingly sells everything, from food to home electronics, and is a favorite shopping spot for foreign visitors.

In the aftermath of the end of World War II, Japanese women who fell in love with soldiers of the Allied Occupation Forces visited the alley where a business in ghost writing love letters in English was booming. Hence the alley's moniker.

Many other streets in Shibuya Ward have unofficial names, such as “sandwich road” and “penguin street.”

The "ya" kanji character in the word Shibuya means “valley,” so perhaps it is fitting that the central part of Shibuya is located lower than surrounding areas.

Josh and Sugimura felt like they were tracing the topography of the area as they took note of differences in elevation.

Sugimura noted that some buildings located on a slope that extends from the front of Shibuya Station have their entrance on the ground floor and the exit on the fourth floor.

Josh thoroughly enjoyed his night out in neon-lit Shibuya.

“I've lived in Japan for more than 10 years. Yet, (Shibuya) was full of places I didn’t know anything about,” Josh said. "My image of Shibuya was of a town full of young people. Now, I think grownups can have a really good time here. My image of Shibuya has definitely changed.”

The tour that Josh joined has only been available since 2018. It costs 2,200 yen ($20) per person, but the price can fluctuate depending on demand.