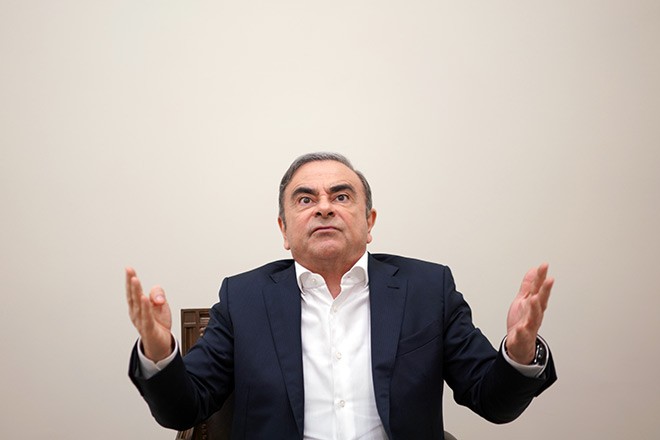 Carlos Ghosn, the former Nissan Motor chairman, in an exclusive interview with The Asahi Shimbun in Beirut on Jan. 10 (Tetsuro Takehana)

The lawsuit, filed with the Yokohama District Court, states that Nissan suffered financial damage from the series of Ghosn's alleged illegal acts, including having the company pay for the acquisition of residences abroad and repair work as well as using the company jet for personal use.

The lawsuit seeks compensation not only for the financial burden shouldered by Nissan but also for the expenses the company incurred for the in-house investigation into the alleged misuse of funds by Ghosn.

A report from that investigation was compiled in September and laid out the various misuse of company funds by Ghosn for his personal use.

The amount of compensation sought could increase if the fines imposed by the Financial Services Agency on Nissan for under-reporting Ghosn’s annual remuneration are added on.

Nissan is also considering filing a slander claim against Ghosn for his comments about the company and its executives that were made during a series of news conferences in Lebanon with media representatives from various nations.

The company alleges that Ghosn’s “groundless claims” about the company defamed its character. Ghosn jumped bail in December and fled to Lebanon from Japan, apparently aboard a private jet.