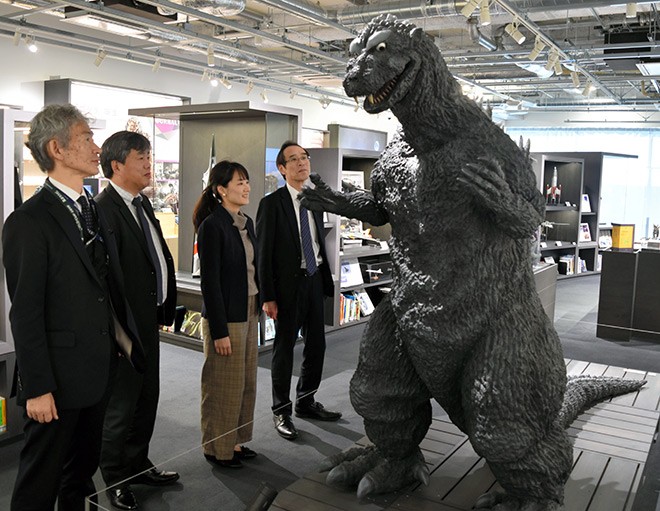 This year marks the 50th anniversary of the death of movie director Tsuburaya, “the god of ‘tokusatsu’ special effects,” who brought such iconic characters as Godzilla and Ultraman to the silver screen.

Tsuburaya was born as the eldest son into the city’s established family of “koji” (rice malt) merchants.

“He had no interest in the family business,” said Takeyuki Takakuda, a Sukagawa city official in charge of the museum. “As a boy, he dreamed of building his own plane and flying around the world.”

At age 15, he went to Tokyo and enrolled in an aviation school. But his dream ended with the death of the school’s only instructor in an air crash.

After an acquaintance invited him to work in the film industry, he came up with a slew of innovative techniques including film superimposition.

During World War II, Tsuburaya was involved in a number of propaganda films, for which he was expelled from public office after the war.

He survived the consequent financial hardship by freelancing as a special effects subcontractor.

He was--surprisingly--already 53 by the time he started working on his first Godzilla movie after the postwar purge ended. When he created Ultraman three years before his death, he was 65.

In short, his life as a creator bore fruit only in his final years.

A display panel in the museum quotes him as recalling, “I felt a bit abashed, unable to shake off this thought, ‘Here I am, a geezer who’s having a great time with his fantasy monsters.’ ”

He reportedly was never a fan of the graphic depiction of blood and gore.

The museum is of a modest scale. But in its initial year, it drew a far larger number of visitors than anticipated.

Tsuburaya lived a checkered life with many setbacks. But his works, into which he poured his passion in his 50s and 60s, continue to fascinate audiences.