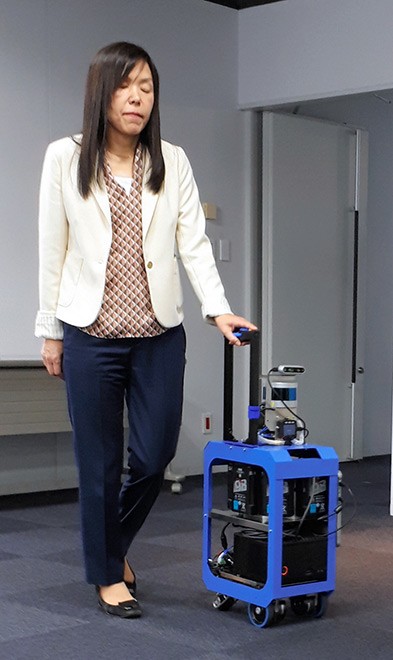 Chieko Asakawa, an IBM Japan fellow who has vision problems, walks with assistance of a robotic suitcase equipped with AI. (Keiko Nannichi)

A suitcase-shaped robot that uses artificial intelligence is being developed to guide visually impaired people in a joint project by IBM Japan and four partners.

Inspired by a proposal from Chieko Asakawa, an IBM Japan fellow who has vision problems, the proposed device will utilize a sensor, camera and battery to detect obstacles and alert its users of their existence through tactile sensation.

It will also notify users if friends are approaching or cafes and other facilities are located nearby through an audio system that serves as their “eyes.”

“It's impossible for visually impaired individuals to walk around town alone freely and safely,” Asakawa said. “I want to make that possible.”

Asakawa hit upon the idea for the guide robot when she was pushing a suitcase in front of her during a business trip.

The thought came to her that visually impaired people could walk around safely if a sensor-mounted suitcase would scan the surroundings for danger.

IBM Japan will be responsible for artificial intelligence for the robot.

A joint organization set up by the five companies in December will identify challenges that must be overcome within three years through fiscal 2022 for commercializing the device.

The guide robot will first debut at airports, commercial complexes and other indoor facilities, and will then be further improved for outdoor use.