Uproar over rumored affair and use of tax money for hotels 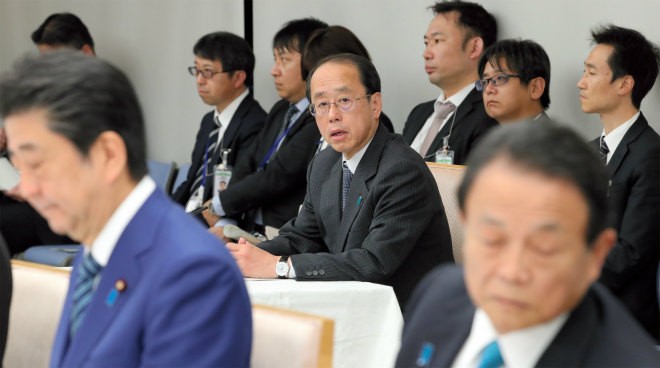 An adviser to the prime minister and a top-level health ministry bureaucrat were accused of impropriety by booking connecting hotel rooms during a business trip to India, raising questions about the use of tax money for their rumored affair.

Lawmaker Kiyomi Tsujimoto of the opposition Constitutional Democratic Party of Japan criticized the pair's alleged shenanigans during a Lower House Budget Committee session Feb. 12, saying they had crossed the line in mixing their private and public lives.

However, Chief Cabinet Secretary Yoshihide Suga defended the couple, saying they drew a line between their private and public lives.

The popular weekly magazine Shukan Bunshun reported in its edition published Feb. 6 that Hiroto Izumi, a special adviser to Prime Minister Shinzo Abe, had a connecting room to that of Hiroko Otsubo, a deputy director general for the health ministry, at the luxury hotel where they stayed during the visit to India in September 2018.

The matter was also raised at previous sessions of the Lower House Budget Committee. The Foreign Ministry acknowledged that Izumi booked a similar setup at hotels on all four overseas business trips he took in 2018.

Izumi also traveled to Myanmar, China and the Philippines.

The ministry explained that Otsubo’s room was next to Izumi’s on each trip, adding that the arrangement for the India visit was made by Izumi's side.

Otsubo told a Feb. 7 session of the Lower House Budget Committee that her job required her to make overseas business trips.

She explained that Izumi had a history of being hospitalized prior to making a business trip because he fell over.

"As I hold a medical license, it made sense that I accompanied him,” she said.

Opposition lawmakers clamored for Izumi's attendance at the Feb. 12 Lower House Budget Committee meeting, but the ruling coalition ignored them.

The Shukan Bunshun reported that when Izumi went on a business trip to Kyoto with Otsubo in August 2019, the pair privately went sightseeing.

Suga explained that, "After asking them to clarify the situation, we heard that they drew the line between their private and public lives.