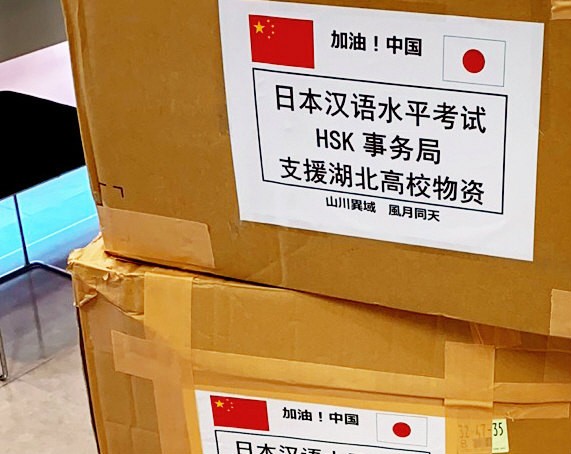 The HSK secretariat in Japan sends relief supplies to Hubei province in China. The poem, “Even though we live at different places, we live under the same sky” is written on the last line. (Provided by Xinhua news agency)

BEIJING--Citizens here are praising a Chinese poem written on relief supply boxes sent from Japan as a sign of heartfelt support for China in its struggle to cope with the deadly coronavirus.

The eight-Kanji character piece reads: “Mountain, River, Different, Areas/ Wind, Moon, Same, Sky” (Even though we live at different places, we live under the same sky).

The message is said to have so impressed Ganjin that he decided to come to Japan after receiving it. The monk helped to propagate Buddhism in Japan.

“After 1,300 years, I also cried over the poem,” wrote one Chinese poster. Videos were also uploaded to Chinese social media to explain the passage.

“I thought the poem best described how we feel right now,” said Keizo Honda, 58, the secretary-general of the Japan Youth Development Association (JYDA) in Tokyo.

The JYDA, which serves as the secretariat of the Chinese government-accredited Chinese proficiency test HSK, began sending aid supplies to Hubei province in January and wrote the Chinese passage on all the boxes it mailed.

Since the outbreak last month, Chinese media have been extensively reporting on support coming from Japan.

Japan's central and local governments and Japanese companies have donated 2.72 million masks to China to prevent the infection from spreading, the Chinese Embassy in Tokyo announced on its website.

Monetary donations from Japan, including from the private sector, totaled 28.89 million yuan (450 million yen, or $4.1 million).