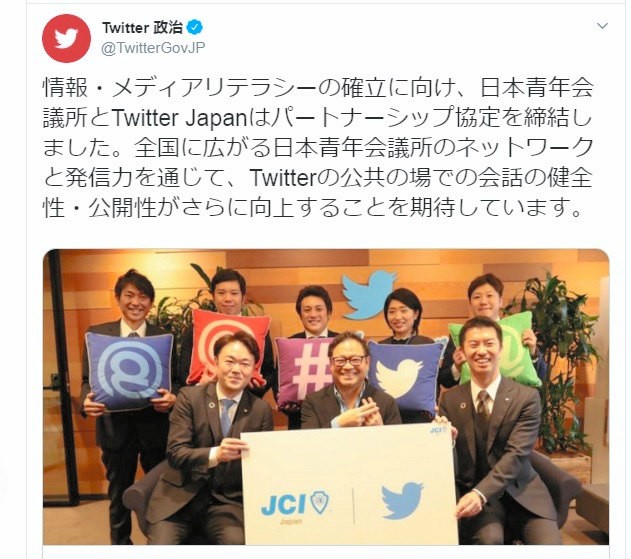 A nonprofit organization with a history of obnoxious online behavior has come under criticism again just days after partnering with Twitter to promote media literacy and heighten morality on social media.

Junior Chamber International Japan (JCI), a public interest association that has been headed by leading politicians, opened its official Twitter account in January to urge the public to “ensure the nature of information.”

The account’s profile section says JCI is planning activities to enlighten the public on media literacy and improve morals on social networking sites.

In late January, JCI announced that it had inked a partnership deal with the Japanese arm of U.S.-based Twitter Inc. and asked the site operator for advice.

Twitter Japan also posted the announcement, saying it expects the partnership with JCI would help to improve the “soundness and openness of online public conversation on Twitter.”

But it soon became known that the JCI account retweeted a message that called journalist Daisuke Tsuda “deranged.”

Tsuda had served as artistic director of the Aichi Triennale, an international art event in Nagoya that came under fire from conservative groups over its “free expression” displays, including a statue of a wartime “comfort woman.”

The group, which is known for its recent support of constitutional revisions, has admitted that it retweeted the message about the journalist and deleted the retweet.

However, a JCI official said, “Retweeting doesn’t mean that we agree with the message.”

An employee of Twitter said the company didn’t know that JCI had spread the insult against Tsuda: “We didn’t anticipate such retweet.”

INDELIBLE PAST AS ‘NATIONALISTIC MEAT LOVER’

JCI used to have a secret Twitter account under the name of “Uyo-kun.” In Japanese, “uyoku” means right wing.

The account was set up to look like it was controlled by an anonymous individual. Its avatar featured a manga-like character showing off muscular arms and standing in front of two hinomaru flags.

The account’s profile said: “Conservative thought. Muscle training is my hobby. Meat is my favorite food.”

Uyo-kun started tweeting in January 2018 and repeatedly singled out China and South Korea for criticism.

“(Japan) should break diplomatic ties with these two stupid nations,” one of the tweets said. “Or we should fire a missile and bomb them.”

The account also condemned “those who don’t want to revise the Constitution” as “idiots,” and berated and insulted news media and certain lawmakers and individuals.

Uyo-kun’s name-calling included “an incurable moron” and “nuttier than a fruitcake.”

One tweet called an individual “absolutely crazy,” and added, “It’s pitiful because (the person) is still young.”

In late February 2018, JCI admitted to creating the Uyo-kun account to “enrich debate about constitutional revision.” It apologized for the “lack of decency” in the tweeted content.

But JCI said the account was managed by an individual employee, and the tweets went unchecked by the group’s compliance division.

In response to JCI’s “deranged” retweet, Twitter Japan said: “We signed a partnership with JCI because we wanted to support the group that has regretted its past conduct and hopes to improve media literacy issues. We will provide training to JCI officials and members.”

JCI was established in 1951 and has about 700 regional branches nationwide.

The group had about 36,000 members as of January 2018, most of them company representatives and executives. Men and women from 20 to 49 years old are eligible for membership.

JCI’s main activities include hosting open forums during elections. Many of its members have run for public office.

Past JCI presidents include powerful politicians, such as Taro Aso, the current finance minister and deputy prime minister.