EDITORIAL: Henoko base work should halt after report of unstable seabed 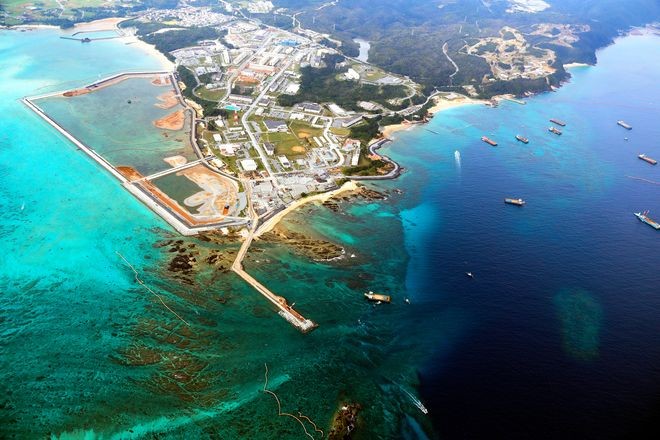 Reclamation work is under way off the Henoko district in Nago, Okinawa Prefecture, on Dec. 19. Soft ground exists under the seabed seen to the right in the photo. (Asahi Shimbun file photo)

Another fact underscores afresh the government’s obdurate and unreasonable refusal to rethink its plan to build a new U.S. military base in the Henoko district in the city of Nago, Okinawa Prefecture, despite many arguments against the plan.

Prime Minister Shinzo Abe’s administration has been forging ahead with reclamation work to build the new facility off the Henoko district to replace U.S. Marine Corps Air Station Futenma, located in the crowded city of Ginowan, also in Okinawa.

However, the administration is turning a blind eye to inconvenient data and a deaf ear to strong local opposition.

Data has been revealed to show that the extremely soft ground under the seabed in parts of the reclamation area may be deeper than 70 meters, the maximum possible depth for work to shore up the ground, according to the government.

At a location in the eastern tip of the reclamation area where embankment work is to be conducted, a Defense Ministry contractor used the samples it had collected for a “physical test” to identify the type of underground soil also for checking the strength of the seabed. The contractor found that the strength of the ground was the second lowest on a scale of six in some parts deeper than 70 meters.

The Defense Ministry has downplayed the implications of the finding, pointing out that the samples were collected for a different purpose and that the test was a simple one carried out on a ship.

The government claims it was not an authentic “dynamics test” designed to measure the firmness of the seabed. In a Feb. 12 Lower House Budget Committee session, Defense Minister Taro Kono repeatedly stressed that it was by no means a dynamics test. The finding should not be reflected in the expected change in the construction plan, he added.

Even if the test was a simple one not capable of determining the strength of the seabed, the government should not take lightly the fact that data casting serious doubt about the viability of the plan has emerged. It should conduct a soil study by drilling test holes to make an accurate measurement of the strength of the ground.

It is said that vessels used for soil stabilization work can only handle operations to a depth of about 70 meters under the seabed. Based on the findings of surveys at three other locations 150 to 750 meters away, the Defense Ministry claims that the soil stabilization work at the site in question will also only require operations to a depth of 70 meters.

Why does the administration avoid conducting a soil survey at a vital location under the planned embankment?

The administration’s recalcitrant stance toward the issue can only be interpreted as a sign of its reluctance to recognize the seriousness of the problem of soft soil.

The data that has been revealed afresh was shown in English among the reference materials provided at the end of the report the ministry submitted to the Diet in March last year.

Then Defense Minister Takeshi Iwaya at the time denied that such a survey had been conducted. The data was effectively concealed from the public.

At the end of last year, the government announced a fresh estimate of the overall cost of constructing the Futenma replacement facility including the amount needed to solidify the soft ground.

The cost will surge by about 170 percent from the original estimate to some 930 billion yen ($8.46 billion) while the construction will take 12 years to complete, according to the government’s new projections. That means return of the Futenma base site will be considerably delayed to the mid-2030s or later.

If the soft ground actually reaches deeper than expected, the cost and the construction period could increase further, while the technological viability of the plan will also be called into question.

When geological surveys conducted during the 2014-2016 period discovered a vast expanse of soft ground, the administration did not publish the discovery and acknowledged the fact only after it started dumping earth and sand into the reclamation area in December 2018.

The Abe administration’s high-handed approach to carrying through with the plan despite strong opposition that has been repeatedly expressed by local voters has clearly reached its limits.

It is glaringly obvious that the plan based on the assumption that areas off Henoko where the underground soil is “as soft as mayonnaise” are suitable for building the new air base is already bankrupt.

The government should immediately halt the work and start from scratch.