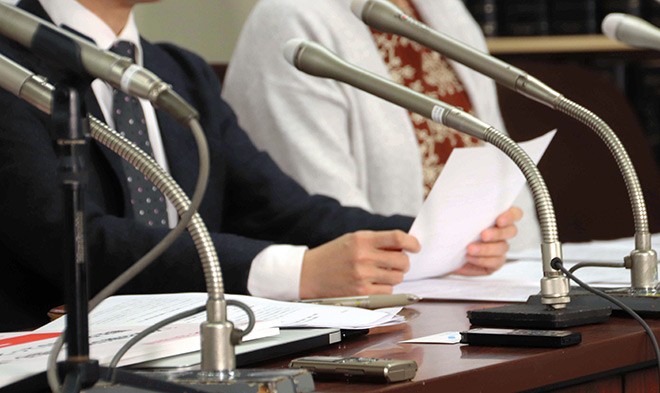 A transgender man and his partner speak about their decision to sue the state to legalize same-sex marriages in Tokyo on Feb. 13. (Tomoko Yamashita)

Denied the right to marry the partner of his choice, a transgender person for the first time will join plaintiffs in the “Valentine’s Day lawsuit” demanding the legalization of same-sex marriages.

The transgender man, a company employee in his 40s in Tokyo, appeared at a news conference on Feb. 13 with his partner, a woman who works as a public employee.

The couple is expected to soon file legal action at the Tokyo District Court, joining 13 other couples who were named in the unprecedented nationwide lawsuit first filed on Feb. 14, 2019, challenging the constitutionality of not recognizing same-sex marriages.

Takako Uesugi, a lawyer representing plaintiffs in the group lawsuits, said at the news conference that the state is making a "last-ditch argument" in continuing to deny same-sex marriages.

“We will counter their arguments theoretically," she said.

The couple has lived together for more than five years. Because of the gender listed in the family register, they are considered a same-sex couple and not allowed to join in matrimony.

They were once refused booking of a wedding hall for the same reason, the couple said.

The public employee in her 40s said she was formerly married to a man.

“I feel we are bound much more tightly (compared to my previous marriage) but we are not legally protected like a married couple,” she said.

“Is it that difficult (for the state) to accept us as a married couple, just like any other opposite-sex married couple?” the company employee asked.

Since last Valentine’s Day, the group lawsuits have been filed at Sapporo, Tokyo, Nagoya and Osaka district courts. In September 2019, the group filed a lawsuit at the Fukuoka District Court as well.

The group suits, the first in the nation, challenge the constitutionality of denying same-sex marriages under the Civil Law and Family Registration Law.

Of the 13 couples, or 26 plaintiffs, nine have shared their unfair and unjust experiences in testifying in court.

An online petition to legalize same-sex marriages has collected more than 30,000 signatures, and 70 groups nationwide have given their backing to the campaign.

In the meantime, a “partnership system” that publicly recognizes same-sex couples and other types of couples has been implemented nationwide.

Such a recognition system was first introduced in Tokyo’s Shibuya and Setagaya wards in 2015. As of the end of January, 34 municipalities had effectuated such a system.

The state, however, has argued that marriage is between a man and a woman, based on Article 24 of the Constitution, which stipulates, “Marriage shall be based only on the mutual consent of both sexes.”

The state has claimed that the “both sexes” means a man and a woman and excludes same-sex couples. Thus, banning same-sex marriages does not violate the Constitution’s Article 14, which states, “All the people are equal under the law.”

Ken Suzuki, a law professor at Meiji University, said: “Same-sex marriage wasn’t envisioned across the world when the law was made. It is just that the Constitution did not envision it.”

The state has argued that marriage is connected to reproduction and it presupposes that it is between a man and a woman.

He cited a legal precedent in Taiwan that ruled a ban on same-sex marriages was unconstitutional.

“When an opposite-sex married couple doesn’t bear a child, the marriage won’t be annulled," he said. "The idea that reproduction is the purpose of marriage has been denied already.”

(This article was written by Yuki Nikaido, Tomoko Yamashita and Satomi Sugihara.)