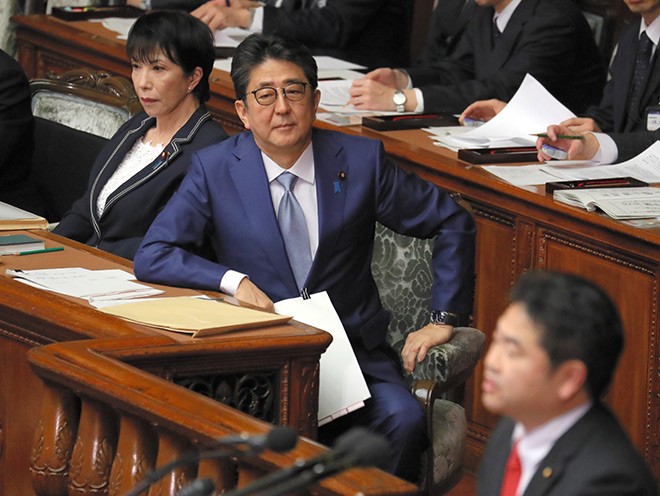 Prime Minister Shinzo Abe said Feb. 13 the government changed its “interpretation” of a law to delay the mandatory retirement of a high-ranking prosecutor who is seen as close to the administration.

Opposition parties have said the postponed retirement was an “illegal act” committed by the scandal-ridden administration to promote an ally to the nation’s top prosecutor post.

The government had previously said its decision to allow Hiromu Kurokawa, chief of the Tokyo High Public Prosecutors Office, to extend his service by six months beyond his 63rd birthday was permitted under the National Public Service Law.

But opposition party lawmakers pointed out that when the law was revised in 1981 to extend the mandatory retirement ages of public servants, the government specifically said the revision would not apply to public prosecutors.

At the Feb. 13 Lower House plenary session, Takashi Takai of the opposition Constitutional Democratic Party of Japan asked Abe about the 1981 decision and the move to allow Kurokawa to work beyond his mandatory retirement age.

Abe acknowledged that the government in 1981 exempted public prosecutors from the extended retirement age provision.

But he went on to say, “Public prosecutors are also national public servants, and we decided to interpret the National Public Service Law to allow for its provisions to apply to public prosecutors.”

Legal experts said the Abe administration is making light of the lawmaking process.

“Having a later government change the spirit of a legal revision presented by the government that had enacted the revision could hurt trust in such legal interpretations,” said Nobuo Gohara, a lawyer who once served as a prosecutor.

Gohara also said the Abe Cabinet’s decision could fuel suspicions about “the political intent” of the move.

The Abe administration had previously been criticized for brushing aside legal interpretations.

A decision by the Abe Cabinet in July 2014 led to a change in the long-held government interpretation that Japan is prohibited from exercising the right to collective self-defense.

The reinterpretation allowed for a partial exercise of that right in connection with national security legislation that opened up the possibility of Japan’s Self-Defense Forces cooperating with foreign militaries.