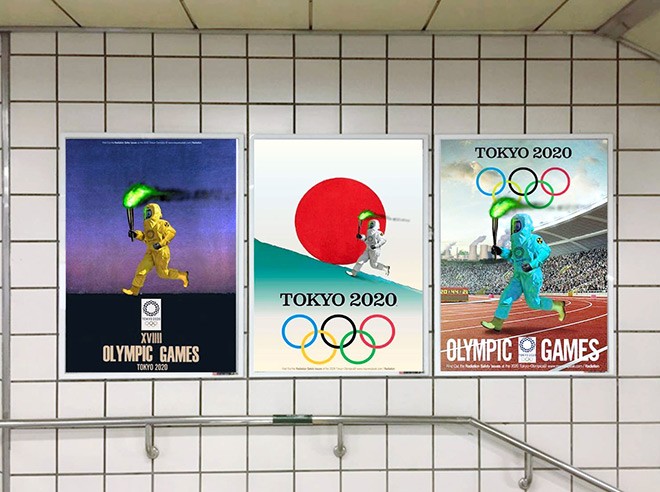 The posters created by the Voluntary Agency Network of Korea feature torch bearers in protective suits and the words Tokyo 2020. (Captured from the group’s Facebook account)

“The reality is totally different,” Suga said at a news conference on Feb. 13. “We can never overlook the issue.”

On its Facebook page, VANK said it created the posters to warn against radiation in Japan, apparently referring to the nuclear disaster at the Fukushima No. 1 power plant triggered by the March 2011 Great East Japan Earthquake and tsunami.

“We included messages of warning about the safety of radiation, the biggest concern during the Tokyo Olympics,” the group said. “Host country Japan said agricultural products from Fukushima Prefecture are safe and announced that it will provide them for Olympic athletes.”

According to VANK's website, the group was founded in 1999 to “properly convey South Korea to the world through the internet.”

The group opposes Japan’s use of the “kyokujitsuki” (rising sun) flag to cheer on athletes at the Games.

(This article was written by Ryutaro Abe in Tokyo and Takuya Suzuki in Seoul.)