Rakuten: Sellers who quit due to free shipping will get compensation 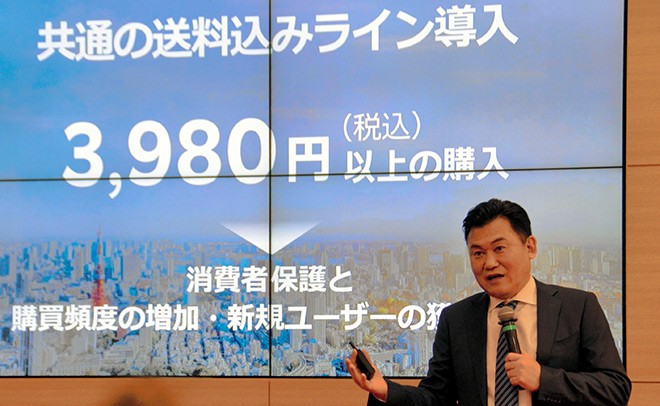 Hiroshi Mikitani, chairman and CEO of Rakuten Inc., at the company’s headquarters in Tokyo’s Setagaya Ward on Feb. 13 (Fumiko Kuribayashi)

Rakuten is refusing to budge on its plan to introduce a new free shipping plan despite protests from sellers, who petitioned the Fair Trade Commission (FTC) to order the e-commerce giant to rescind it last month.

The chairman and CEO of Rakuten Inc. on Feb. 13 reiterated that the company will start its new free shipping plan from March 18 as scheduled, while suggesting that sellers who are unhappy and withdraw from the online shopping mall will be compensated.

“Thousands of sellers have already prepared themselves for the (new free shipping plan),” Hiroshi Mikitani said at a news conference at the company’s headquarters in Tokyo that day. “Many of them have voiced concerns that it would be too late to scrap the plan now.”

Mikitani added he has “been thinking about various ways to support sellers who cannot abide by it.”

Terms and amounts of compensation will be detailed later and sellers will be notified by the end of February, Mikitani said.

If sellers withdraw from Rakuten's online shopping mall and move to their own sites or other platforms, such as those operated by Amazon Japan and Yahoo Japan Corp., the Rakuten shopping mall’s webpages will update their information to notify customers.

Rakuten has pledged to start free shipping on all orders of 3,980 yen ($36) or more, including tax, with the exception of shipments from Okinawa Prefecture or remote islands.

But the plan has drawn fire from some sellers and antitrust officials.

The FTC warned Rakuten in the fall that the plan could violate the Anti-Monopoly Law and the company could be deemed to be “abusing its dominant bargaining position.”

Since Rakuten will not shoulder actual shipping costs, FTC officials had concerns that the plan would impose a one-sided burden on sellers.

But Rakuten insisted on going forward with the plan, prompting the FTC to search the company’s headquarters on Feb. 10.

Commenting on the search, Mikitani said, “There's no other way for sellers to swim in rougher seas and survive the escalating competition. I really hope the FTC will understand that.”

But Mikitani added, “To me, it's highly doubtful if authorities understand consumer behavior when making a decision.”

At the same time, Mikitani said the company has changed in the wording of its plan from "free shipping" to "shipping fees included."

Explaining the reason for the change, Mikitani said the wording "free shipping" caused a "misunderstanding that sellers cannot adjust prices and costs will increase.”

How the shopping site will finally describe the new plan will be decided later, Mikitani said.

Some sellers have formed the Rakuten Union and submitted signatures opposing the new plan to the FTC.

“Some of the union members charge a 2,000-yen shipping fee on a 380-yen item. We need to clean up such sellers. Otherwise, customers will not feel safe shopping at Rakuten,” Mikitani said.

Responding to Mikitani’s comments, a Rakuten Union official said sellers may not be OK with the idea of leaving Rakuten in exchange for compensation.

“It’s not like that. We will lose ratings and feedback from customers that we have built up in the past,” the official said. “I don’t think sellers will agree with the (compensation policy).”