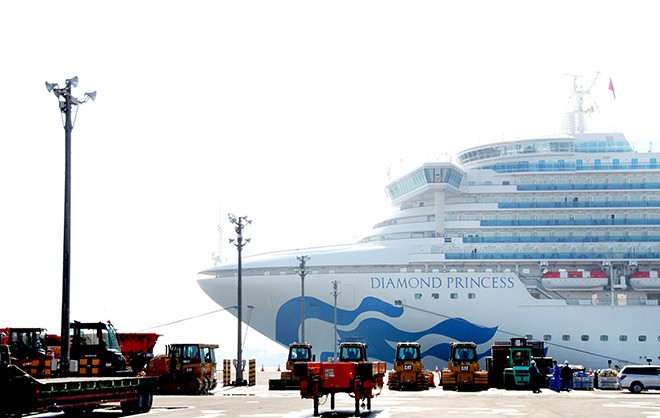 The government again changed its policy and will allow some elderly passengers to leave the Diamond Princess, a quarantined cruise ship infested with the new coronavirus in Yokohama, the health ministry said Feb. 13.

“There are passengers whose chronic diseases and health conditions could worsen if they stay on the cruise ship for a long period of time,” health minister Katsunobu Kato said.

The number of positive coronavirus tests has soared among the nearly 3,700 passengers and crew since the ship arrived at Yokohama Port on the evening of Feb. 3.

According to the ministry, 226 people over the age of 80 are aboard the ship. Of them, permission to disembark will first be granted to those with chronic illnesses or those who are staying in rooms with no windows or with windows that cannot be opened.

People accompanying them will also be given permission to leave the ship.

If they test negative for the virus, they can leave the ship and stay at government-prepared accommodation facilities starting on Feb. 14.

If their results are positive, they will be sent to medical institutions.

The government has not decided on the required length of stay at the accommodation facilities.

The ministry is considering expanding the disembarking policy to those under 80 years old.
As of Feb. 14, the total number of infections had reached 218 from among around 500 people tested.

The government initially allowed passengers and crew members who showed no symptoms to forgo the virus tests and disembark.

However, after 10 positive tests were announced on Feb. 5 and the government learned that symptomless people could be carrying the virus, it ordered people to stay on the ship for 14 days.

The government thought that isolating passengers in their guestrooms until Feb. 19 would contain the virus, but additional people have continued to test positive.

Some people with chronic illnesses were sent to hospitals after their conditions worsened.

On Feb. 13, infections were confirmed in 43 passengers and one crew member. Of them, 29 are Japanese.

Ten of the people who were sent to medical institutions are in critical condition, including eight who were confirmed to be infected with the coronavirus.

A Cabinet meeting on Feb. 13 approved revisions of ordinances of the infectious disease law and the quarantine law.

The revisions, which took effect on Feb. 14, allow the government to force infected people to be hospitalized, even if they are not showing symptoms of the virus.

The government can also isolate people in medical institutions if they are suspected to be infected when they try to enter Japan.