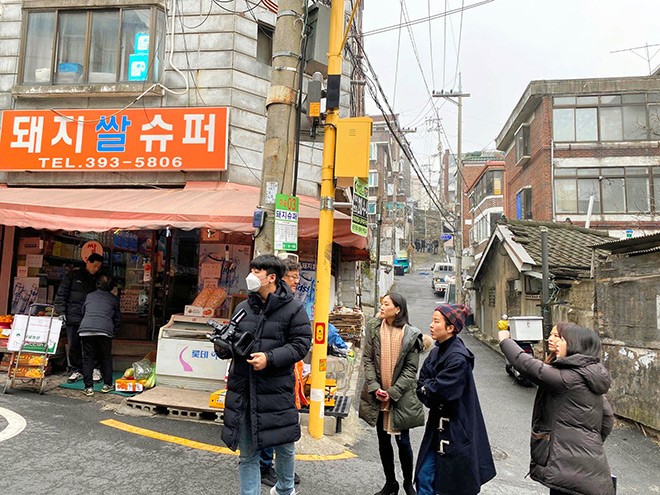 People flock to a supermarket that appears in the Oscar-winning film “Parasite” in Seoul’s Mapo district on Feb. 13. (Daisuke Shimizu)

SEOUL--English teacher Matto Giga is caught up in the "Parasite" fever sweeping the capital here, visiting one of the locales in the Oscar-winning film to take pictures.

“Thinking that some scenes were shot here, I felt the excitement of the film coming back,” said Giga, 28.

Fans, tourism officials, instant noodle companies, and an aspiring politician all are basking in the afterglow created by Bong Joon-ho’s black comedy movie.

The film portrays a poor family living in a semi-underground apartment in Seoul and their attempt to escape from their misery by being parasitic and latching onto a wealthy family.

Since "Parasite" won four Academy Awards in major categories on Feb. 9, cinema fans have been making pilgrimages to the filming locations.

Locales such as a supermarket where a leading character talked with his friend and a nearby slope have suddenly been inundated with film buffs and curious visitors from near and far.

The city government isn't missing the golden opportunity to market itself and boost tourism.

Starting at the end of 2019, its official website, run by the Seoul Tourism Organization, has created a page listing the filming locations, such as “the stairs of Jahamun Tunnel” and “Sky Pizza,” with the caption, “Sacred place of ‘Parasite’ fans.”

The information is accessible in several languages, including Korean, Japanese and English.

After it became the first foreign language film to win the Oscar for best picture at the 92nd Academy Awards in Los Angeles, the website’s viewership skyrocketed and quickly reached about 60,000, the city government said.

City officials on Feb. 13 announced that it will create a “tourist route” of these locations and set up signboards at four locations.

The film’s success has boosted other businesses and food sales as well.

Even though "Parasite" does not show the actual store, the number of customers has doubled, said Um Hangki, 65, the shop manager.

Um has made a notebook available inside the shop for fans and visitors to scribble messages, which is now full of writing in Japanese and English, among other languages.

One fan wrote, “I came here because (the film) made me want to eat the (pizza) here.”

Fans of the movie have been eagerly slurping down the instant noodles that the main characters eat in the film, according to the Korean news media.

In Daegu, the director Bong’s hometown, an aspiring politician planning to run for public office has made a campaign promise to “build a cinema museum that praises Bong."

“Just like a parasite,” Korean media wrote in mocking the politician.

The film has been acclaimed worldwide for its depiction of the economic inequality between the haves and have-nots in South Korea.