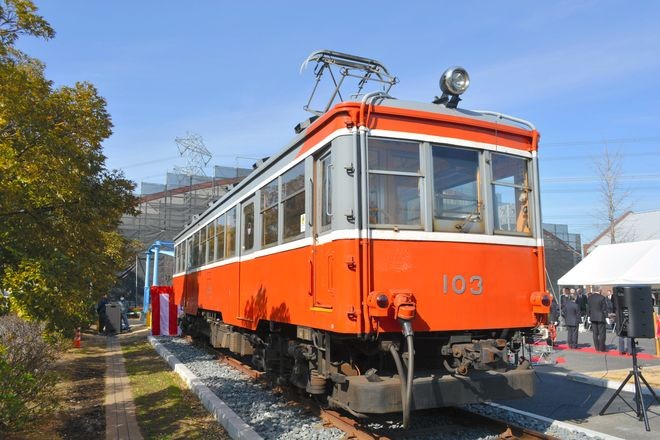 The No. 103 train car is put on public display at the Nippon Institute of Technology in Miyashiro, Saitama Prefecture, on Feb. 7. (Shintaro Kato)

MIYASHIRO, Saitama Prefecture--After a century of running through the mountains of Hakone, Kanagawa Prefecture, a car of a train operated by Hakone Tozan Railway Co. is finally settling into a well-deserved retirement here.

Hakone Tozan Railway, which is based in Odawara in the prefecture, donated the car of the local train to the Nippon Institute of Technology here after the train’s final run last summer.

The No. 103 car of the Moha 1 series electric train has been on public display at a museum here since Feb. 7.

The train, which went into service in 1919, remained in operation for 100 years. The institute said the car will be used as a learning tool for students as well.

“It’s wonderful that the train car will be used as a learning material,” said Hakone Tozan Railway President Mitsuo Fukawa, who attended a ceremony to unveil the train car for display that day.

The original train was made of wood, but it was revamped using both steel and wood in 1950, when Odakyu Electric Railway Co. started service between Odawara and Hakone-Yumoto stations. Many improvements were made to the train, including replacing the undercarriage with a new one and repainting the body.

The mean gradient of the railway is 20 per mill, which means a train climbs to a height of 20 meters after running 1,000 meters, with the maximum gradient of 80 per mill. The train uses a drive system called nose suspension drive and makes a unique growling sound as it climbs up a hill.

A model of the No. 101 car of the Moha 1 series train donated by the institute’s Komaba High School in Tokyo is displayed at Gora Station. Hakone Tozan Railway said that is one of the reasons it donated the No. 103 train car to the institution.

Parts of the No. 103 train car were separately transported from the station on a truck after the train’s final run on July 19. The undercarriage was brought into the institution in August and the body was transported there in October to be placed in front of the institute-affiliated Museum of Industrial Technology.

The car is the second to be put on display at the museum after a steam locomotive that was made in 1891 in Britain.

According to Hakone Tozan Railway, two train cars of the Moha 1 series were retired last summer. The company said it gave the other car to Odawara-based Suzuhiro Kamaboko Honten, a “kamaboko” fish paste maker. The car was renovated to serve as a cafe in September.

Service between Hakone-Yumoto and Gora stations has long been suspended due to damage brought by Typhoon No. 19, which made landfall in eastern Japan in October. The railway company aims to resume operations this fall.