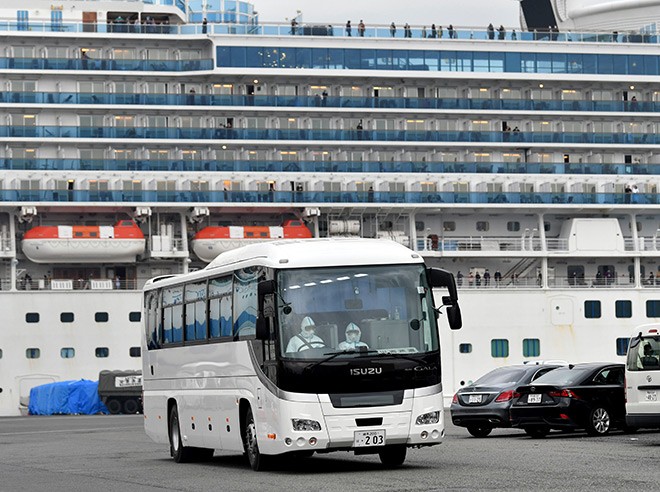 A bus carries elderly passengers from the Diamond Princess cruise ship who were the first allowed to disembark on Feb. 14 under a new government policy. (Hiroyuki Yamamoto)

The coronavirus has spread to Hokkaido in the far north and Okinawa Prefecture in the south as eight new cases were confirmed Feb. 14.

The new infections brought the tally of confirmed cases to 259, of which 218 were among passengers and crew of the quarantined Diamond Princess cruise ship now docked at Yokohama Port.

The latest cases include two people in Tokyo who had contact with a taxi driver in his 70s who had already been confirmed to have the virus. The man is the son-in-law of a woman in her 80s in Kanagawa Prefecture who died on Feb. 13 and was later found to have been infected with the coronavirus.

Officials said one of the two in Tokyo is a man in his 70s who works for a “yakatabune” party boat company in Tokyo and tested positive for the virus. He recalled serving passengers from Wuhan, China, where the outbreak started, on either Jan. 15 or 16.

The infected taxi driver attended a New Year’s party for independent taxi drivers held on a yakatabune on Jan. 18. After the taxi driver was confirmed to have the coronavirus, party boat employees were also tested, leading to the positive result for the employee in his 70s.

The other new Tokyo infection was a woman in her 50s who was in daily contact with the taxi driver as she worked at the branch office for independent taxi drivers.

About 80 people took part in the New Year’s party and about 10 developed fevers and other symptoms. Those 80 and another 20 or so who were in close contact with the taxi driver will also be tested.

Kanagawa prefectural government officials noted that the daughter of the woman who died on Feb. 13 is married to the taxi driver. They said the mother and daughter got together on Jan. 21.

Hokkaido officials said a man in his 50s who tested positive for the coronavirus is listed in serious condition even though he had no record of traveling to China. The man was admitted to an ICU unit on Feb. 12 and continues to use an oxygen mask.

In Wakayama Prefecture, a man in his 70s was infected after being hospitalized in Saiseikai Arida Hospital, where a surgeon was confirmed to be infected on Feb. 13. The man stayed at the hospital from Feb. 6 to 13, when he was transferred to another hospital. He remains in serious condition. It is not known if he had visited China.

In Okinawa Prefecture, a female taxi driver in her 60s was confirmed to have the coronavirus. According to Okinawa prefectural authorities, passengers of the Diamond Princess cruise ship that stopped over at Naha Port en route to Yokohama on Feb. 1 used the woman’s taxi. She is listed in stable condition.

A man in his 60s living in Nagoya was also confirmed with the coronavirus. Although he did not visit China in the two weeks before developing symptoms, he was in Hawaii from Jan. 28 until Feb. 7. He developed a cold on Feb. 3 and a fever on Feb. 8 after returning to Japan.

He sought medical treatment for the fever, but had to be taken by ambulance to another medical institution on Feb. 13 after his symptoms worsened. The coronavirus infection was confirmed the following day.

According to health ministry officials, a man in his 30s who works in local government in Kanagawa Prefecture also tested positive for the coronavirus.

It emerged that he spent about 40 minutes on the afternoon of Feb. 10 helping to transport infected passengers on the Diamond Princess to local medical institutions. He wore goggles and a face mask during that time.

Since he developed a fever later that day, officials are looking into other possible sources of infection as it is unusual for a fever to develop so quickly after contact with an infected individual.

Eleven elderly passengers on the Diamond Princess were allowed to leave the vessel on Feb. 14 as part of a revised government policy.

They were taken to the Wako campus of the National Tax College in Saitama Prefecture, where they will be monitored for possible symptoms.

Under the new policy, passengers aged 80 and older can disembark if they have a pre-existing chronic illness or stayed in cabins with no port holes or port holes that cannot be opened.

Those accompanying them on the cruise will also be given permission to leave.