Experts call for anti-coronavirus plan, fearing it is spreading widely 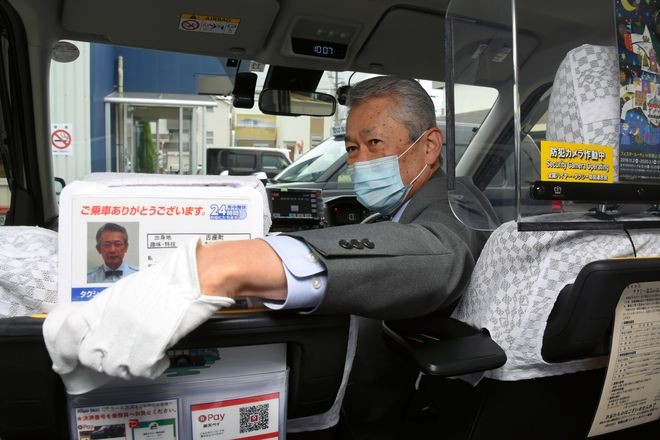 A taxi driver wipes down a handrail with a wet tissue as a precaution against the new coronavirus in Wakayama on Feb. 15. (Takaaki Fujino)

Infectious diseases experts are warning that Japan should draw up countermeasures against the new coronavirus under the assumption that human-to-human transmission is now spreading widely.

The government is summoning medical experts on Feb. 16 to discuss the expansion of the testing of suspected patients for COVID-19 and guidelines for when to seek medical assistance and treatment.

The government’s meeting comes following reports over the past few days of a growing number of infected patients in Japan with no apparent links to Wuhan, the epicenter of the outbreak, in China’s Hubei province.

“There is the possibility that the infection may have spread to people well beyond the groups of patients who have been identified,” said Koji Wada, professor of public health at the International University of Health and Welfare.

At a news conference on Feb. 15, health minister Katsunobu Kato noted the spread of infections among those with no ties to the epicenter city, despite Japan’s attempt to contain the disease with a ban on entry from Chinese cities, including Wuhan.

The number of infections totaled 408 in Japan, including the 355 aboard the Diamond Princess cruise ship docked at Yokohama Port, on Feb. 16.

Among the new cases involve several taxi drivers in Tokyo and elsewhere.

While some believe that staying out of taxis can lessen the risk of exposure to the virus, Takashi Nakano, professor of infectious diseases at Kawasaki Medical School, said the precaution is “meaningless” at the stage Japan is now in.

Nakano said taking precautionary measures against the virus are the same as the seasonal flu.

“It is crucial for each individual to make sure that they frequently wash their hands when they arrive home and disinfect their hands with alcohol when they are at a public meeting place,” he said.

Wada underscored the importance of a step that not only protects healthy people from those infected but prevents virus carriers from spreading it to others.

“If people run a fever and cough, they should take off from work if possible as there is the possibility that they may have been infected by the virus,” he said. “Companies should make it easier for employees to miss work.”