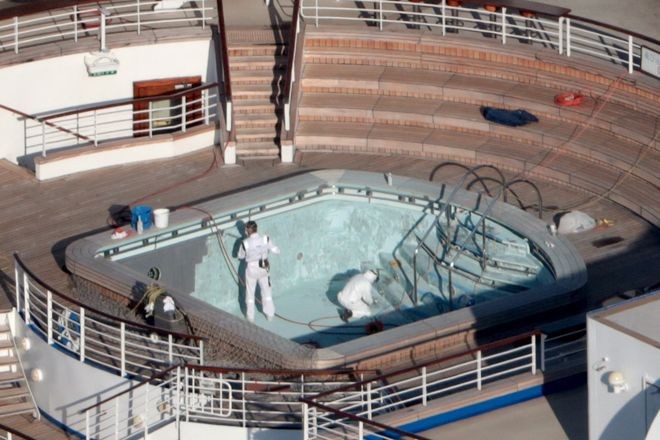 Some U.S. citizens stranded aboard a cruise ship in Yokohama while undergoing quarantine for the coronavirus are declining to board a U.S. government charter flight due to arrive in Tokyo on Feb. 16 to take them home.

One even said the plan to put all the American passengers on a bus and then a plane when they haven't cleared quarantine is "stupid."

“We have decided not to accept the offer,” said Matthew Smith, 57, a resident of California, in a telephone interview with The Asahi Shimbun on Feb. 15. “We would rather stay here and finish the quarantine.”

Smith is aboard the Diamond Princess with his wife. The couple is reportedly among about 380 U.S. citizens who have been isolated in the ship at Yokohama Port since Feb. 5 for a two-week quarantine imposed by the Japanese government.

Amid a media frenzy covering the status of 3,700 passengers and crew members from more than 50 countries, Smith has posted on Twitter that people should not be misled by rumors on the internet that remaining in the ship is dangerous, showing images of meals and citing reassuring inboard announcements.

The Japanese government announced Feb. 15 that in a reversal of its previous policy, it will test all the passengers aboard for infection and those who are cleared can disembark from the ship starting from Feb. 19.

The U.S. Embassy in Tokyo announced its plan the same day to airlift Americans on a charter flight. It said everyone arriving back in the United States would need to undergo another two weeks of quarantine.

Smith said he and his wife believe that they will be better off finishing their quarantine on the ship.

He said the decision to evacuate Americans only a few days before the end of the quarantine period came too late.

“What is likely to happen if we stay here is we will test negative next week and the Japanese will let us go,” he said. “The U.S. government’s alternative is to cram us on a bus and a plane with people who have not finished the quarantine or been tested, so we can be locked up for two more weeks in the United States. That’s just stupid.”

Smith also said the U.S. government’s decision to impose a weight limit on the luggage taken aboard the evacuation flight to about 30 kilograms per passenger is a problem.

He and some other U.S. passengers are concerned about what will happen to the rest of their luggage that they have to leave on the ship as the U.S. Embassy has provided no details.

No explanation has also been given by the embassy concerning how long they will have to wait to return to the United States if they opt out of the charter flight home, Smith added.