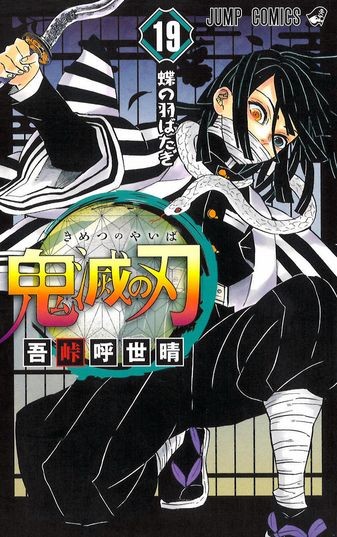 "Demon Slayer: Kimetsu no Yaiba" continues to slay its rivals on manga charts, taking Japan by storm, even claiming long-time favorite "One Piece" as a victim.

The dark fantasy swashbuckler chopped the pirate manga "One Piece" from the top spot on a best-seller list.

It has also caused quite a sensation over the internet.

That said, the title is different from conventional hits that play up the spirits of "friendship, effort and victory."

Instead, it can be characterized by tenderness, experts say, while fans seem to be fascinated by its peculiar qualities that make the title stand out from the mainstream.

ENDING 11-YEAR-RULE OF 'ONE PIECE'

According to entertainment data tracker Oricon Inc.'s weekly comic sales ranking released on Feb. 7, all 18 volumes of "Demon Slayer" dominated the top 18 spots in the list between Jan. 27 and Feb. 2, setting an unprecedented record.

With the latest 19th volume published on Feb. 4, the series continues to sell at a record pace, currently boasting more than 40 million copies in circulation, according to the publisher of the series, Shueisha Inc.

The manga also won the top spot on Oricon's estimated annual comic ranking chart by series in 2019. It became the first title to beat "One Piece," which had remained on the No. 1 spot for 11 consecutive years since Oricon started publishing manga ranking charts in 2008.

Meanwhile, 25 words related to "Demon Slayer" were included in the list of the top 100 internet buzzwords in 2019, including: "Tanjiro Kamado," the protagonist's name; "Demon Slayer Corps," a demon-killing organization to which Tanjiro and others belong; and "Twelve Kizuki," a group of formidable demons.
The original manga series by Koyoharu Gotoge started its run in the Weekly Shonen Jump comic anthology in 2016. It is his first serialization.

The story is set in the Taisho Era (1912-1926) when is Japan infested by human-devouring "oni" demons. Tanjiro's family is brutally slaughtered by a demon, and his younger sister is transformed into a demon herself. He fights demons to bring her back to human form.

The number of circulation of the comic book volumes was 3.5 million before the anime show started. But the figure drastically increased to 12 million when the show ended.

However, what was even more unusual was that its popularity didn't slow there and continued to pick up speed.

"At first, it was just another title popular among female anime fans that comes along every year, like 'Kuroko's Basketball,' but it went on to become popular even among those not interested in anime, like (Makoto Shinkai's) 'Your Name.,'" said anime columnist Ryo Koarai, 30.

As for the reason, she explained that there are three mottos in the world of "Demon Slayer," which are "sympathy, down-to-earthness and salvation," instead of the three values commonly found in manga works published in Shonen Jump: "Friendship, effort and victory."

In "Demon Slayer," the protagonist is connected with the others through sympathy, not through a bond that forms after trading fists. His skills as a demon slayer are not achieved through superhuman training; he makes strenuous efforts just because he thinks it is his responsibility as the first-born son. And his killings of oni serves as salvation for the demons which repent their atrocities in their dying breath.

"There is an aspect more like 'asadora' rather than boys' manga, which helps it be easily accepted not only by anime fans but also by men and women of all ages," Koarai said. Asadora is a morning drama series aired by the Japan Broadcasting Corp. (NHK), which typically deals with family and work through the growth of the protagonist.

It had been customary for key commercial broadcasters to air anime shows adapted from popular manga titles in their primetime hours. But with these anime slots canceled last year, "Demon Slayer" was broadcast in a late night slot by a Tokyo-based local station for the Kanto region.

Meanwhile, the anime adaptation became available on Netflix, Amazon Prime Video and other streaming media, making it easier for the audience to watch the series after it ended its run on TV and apparently helping it gain more popularity by word of mouth.

The original manga has reached its climax, with an animated feature film adaptation planned later this year.

"Whether it can gain further support depends on how much of a buzz the film can create," Koarai said.

DIFFERENT FROM 'ATTACK ON TITAN'

"Demon Slayer" is somewhat different from other conventional mainstream manga titles from Shonen Jump, and that is another factor that contributes to its appeal.

The story structure in which the protagonist grows through battles as they encounter a wide variety of friends and foes follows in the footsteps of Shonen Jump's classic battle-oriented manga works represented by "Fist of the North Star," "Dragon Ball," "One Piece" and "Naruto."

"While combat rules and strategies have become increasingly complicated in recent battle manga works, 'Kimetsu' sticks to simplified settings and is easy to understand even for children," said Go Ito, 52, a professor at Tokyo Polytechnic University.

"It is also considered to be uncharacteristic for a Jump manga," the manga critic added.

There is also eeriness in the manga's character designs and use of colors for both villains and allies, which could have been criticized as being vulgar in the past, Ito said.

Tanjiro is drawn in a quirky style, yet he strikes a chord with readers with his gentleness. He sympathizes with the demons after learning their troubled backgrounds and treats his enemies with tenderness.

"Demon Slayer" is similar to "Attack on Titan," as both titles are popular despite their unique drawing styles and unconventional storylines. The latter tells a story of humans forced to live inside protective walls trying to survive the threat of human-devouring titans.

"There are some keywords to easily describe 'Attack on Titan,' such as a sense of stagnation, but I can't explain 'Kimetsu' well," Ito said.

Speaking of Tanjiro who treats the demons with selfless tenderness, Ito said he feels there is something that goes beyond an ideology in the manga's universe that lies outside the scope of conventional criticisms, which would say things like it expresses friction in the society.

"I also don't know what it is really about, but I read it while crying buckets," he added.