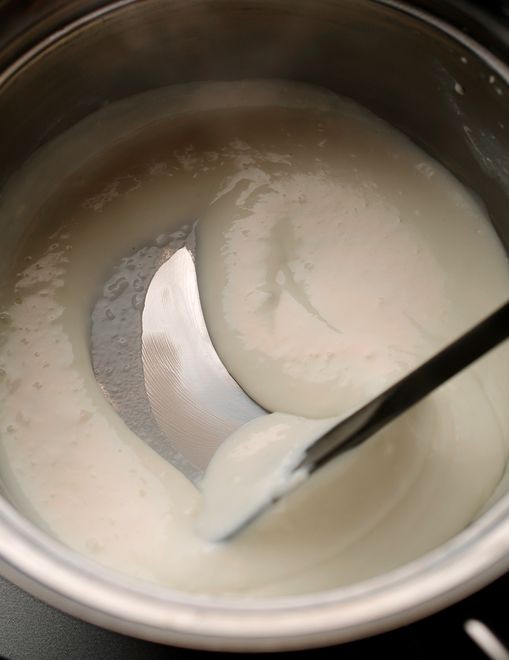 Once you get the hang of making the dishes in our new three-part series, you'll never fail to make great Western-style sauces made of simple ingredients that will widely expand your menu planning.

First up, is a versatile milk-based white sauce that can be poured on an omelet, mixed in a stew or used to simmer meat and seafood.

The goal is to make a smooth white sauce without clumps and with the desired thickness.

There are two keys to achieving this. One is to cook the flour and butter thoroughly when making the roux in the initial stage.

The mixture starts off dry and flaky, but it becomes less clumpy when the water content in the butter evaporates, and mixing becomes easier. The roux is done when it emits a sweet aroma.

The second key is the temperature of the roux and the milk that is added. Since starch starts to gelatinize at around 60 degrees, to get a smooth finish, the piping-hot roux should be cooled somewhat and mixed with milk heated to just under 60 degrees.

Suggested amounts of salt and spices are given on the list of ingredients below.

To enjoy the sauce in a hot gratin, skip a step by boiling the vegetables and macaroni together.

Soy milk and olive oil may be used instead

When making a white sauce, the amounts of flour and butter to that of milk are changed according to the dish it will be used in.

For cream soup or simmered dishes, flour and butter should each be 2 to 4 percent milk.

The figure should be 5 to 7 percent each if used as a sauce or in the gratin introduced this week.

If you are making "kurimu korokke," a type of croquette made by mixing ingredients with white sauce, 10 to 15 percent each of flour and butter should be used so that the sauce will firm up when cooled and can be shaped.

Using olive oil and soy milk instead of butter and milk when making the roux is good for a vegetable-based white sauce, which follows the same cooking process.

As the flavor will turn out simpler than when dairy products are used, a small addition of finely chopped onion or garlic will enrich the taste.

A time-saving way to cook macaroni gratin is simmering the chicken and onion with milk and salt instead of sauteing, then removing them to make the sauce with the remaining milk. The chicken will turn out tender as well.

1. It helps to remember that 1 Tbsp of flour weighs about 9 grams and a piece of butter that is 2 cm square and 3 cm thick is about 10 grams (PHOTO A).

2. Heat milk till just before skin forms on surface.

3. To make roux, heat butter in pot. When it melts and bubbles, turn off heat, add flour and mix with spatula as if kneading. Cook over low heat while mixing (PHOTO B).

Continue for about 3 minutes until boiling subsides and the mixture feels smooth and light. Take pot off stove, let cool while mixing.

5. When all milk is added, place pot on lower medium heat. By raising the temperature while mixing from the bottom of pan, the mixture will thicken and turn glossy. Bring entire pot to a boil and it's done.

Kuniaki Arima is the owner-chef of Passo a Passo, an Italian restaurant in Tokyo's Fukagawa.

Cook meat and mix in white sauce and season with 1/2 tsp salt. Bring 1 liter of water to a boil in pot, add 2/3 Tbsp salt and boil 80 grams of macaroni.

Two minutes before it's done, add spinach. Drain them together and mix with sauce. Fill buttered gratin dish with mixture and dot or sprinkle with desired amount of cheese. Cook in an oven or toaster heated to 200 degrees until browned and sauce is sizzling.

The velvety texture of the white sauce's thickness comes from the roux where flour is sauteed with butter. The starch of flour is in the shape of long chains of glucose. When it is heated with oil that is about 120 degrees, the starch does not color and the chains snap in places. Even if milk is added after that and simmered, the mixture doesn't turn too gluey.