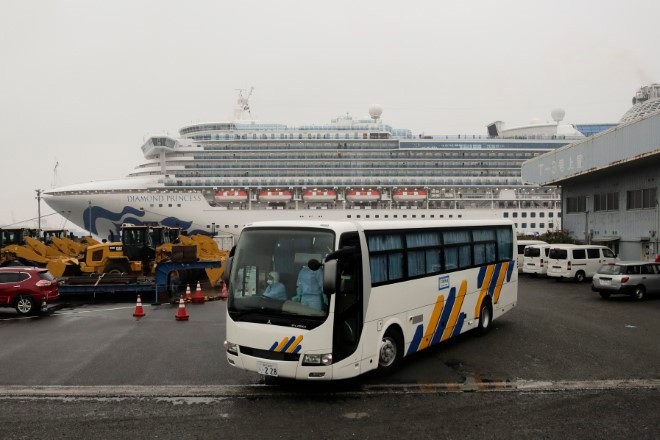 Hundreds of passengers were preparing to be evacuated from a cruise ship on Sunday after spending two weeks under quarantine off Japan over the coronavirus, with Americans flying home on chartered evacuation planes early Monday morning.

Seventy more people were confirmed with the virus on board the Diamond Princess on Sunday, bringing the number of cases from the ship to 355, the most anywhere outside China.

The luxury cruise voyage with more than 3,000 passengers aboard was struck by the virus earlier this month, leaving them and crew in confinement.

The airline was involved in previous U.S. evacuation operations prompted by the virus outbreak in China.

Canada, South Korea, Hong Kong and Italy have followed the United States in announcing flights to bring home their citizens from the ship, which has been under quarantine since Feb. 3.

Countries have said passengers should be symptom-free to board the flights, and are likely to face quarantine on arrival.

Gay Courter, one of the American passengers on one of the chartered flights, told Reuters they were flying to Travis Air Force Base in California, then would be sent to Omaha or San Antonio for another two week of quarantine on U.S. soil.

The other flight will land at Kelly Field Air Force Base, Texas, according to the U.S. Department of Defense.

Courter was on the cruise with her husband to celebrate her 75th birthday.

Photographs from inside one of the charter flights showed a portable bio-containment unit and a U.S. health official in a protective suit.

“Quarantine is necessary. This flight will be hell. Portapotties,” Courter said, referring to the converted cargo plane she was in.

Another American passenger, Matthew Smith, posted photos on Twitter showing a fleet of more than 10 buses that took U.S. nationals from Yokohama port to the airport.

Smith said U.S. officials, dressed in full hazmat suits and face masks, had visited his room to check if he would disembark. He said he wanted to stay.

The charter flights were the only option for eligible U.S. passengers to fly home until March 4 at the earliest, the U.S. embassy in Tokyo has said.

The ship, owned by Carnival Corp., has been held in Yokohama since a man who had disembarked in Hong Kong was diagnosed with the virus two weeks ago.

The ship, once bustling with busy restaurants, game nights and Broadway-style shows, has been reduced to silence.

Those with the disease have been taken to hospital in Japan and no one from the ship has died. Around half of the guests onboard are from Japan.

There were approximately 400 U.S. citizens on the ship, according to the U.S. Centers for Disease Control and Prevention (CDC).

The U.S. Embassy in Tokyo had said passengers and crew on board the ship were at high risk of exposure to the virus and it recommended its citizens get off and take one of the flights home.

“This is a rapidly evolving situation and we are taking additional steps to assist U.S. citizens,” it said.

All passengers were to be screened before being allowed on the chartered flights and everyone would be quarantined for 14 days upon arrival back in the United States.

“No symptomatic or infected passengers will be allowed to board,” it said.

Clyde Smith, 80, who was taken from the ship to a Tokyo hospital after testing positive for the virus, told Reuters on Sunday he had not been told if he would be allowed on a U.S. evacuation plane.

Latest figures from Beijing on Sunday showed 68,500 cases of the illness and 1,665 deaths, mostly in Hubei province.

Japan detected six fresh cases of the coronavirus on Sunday, apart from those on the ship, the health ministry said, taking the total number of in-land infections to 59.