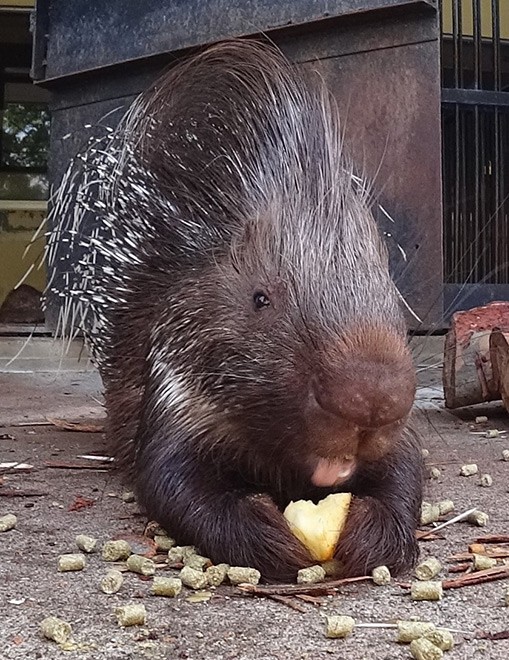 They may be short and cute, but African porcupines can strike fear into the most ferocious of predators.

Porcupines, a member of the rodent family, have small eyes and a large nose similar to those of a capybara.

They also are covered in hard, sharp quills, including short, sturdy ones that can pierce aluminum cans and rubber boots.

When threatened, the porcupines make a rustling sound and erect their quills to show they are ready to attack.

They run backward and hurl themselves at predators, stabbing their enemies with the quills before running away.

The quills can easily fall off, said Natsumi Murakami, 26, an attendant at Tobu Zoo in Miyashiro, Saitama Prefecture, which keeps several African porcupines for display.

"Actually, these quills are body hairs," Murakami said. "These are modified hairs, and when quills are lost, new ones grow back."

The quills have a plastic-like texture. The long, thin and flexible ones are about 30 centimeters long.

But porcupines have no quills on the head or belly, making these parts vulnerable in attacks by leopards and other predators, she added.

African porcupines live in forests, grasslands, rocky areas and elsewhere from central to northern Africa. They have mane-like hair on their backs extending from the head.

They are nocturnal, and stay behind rocks or in burrows during the day. The herbivorous animals have a strong biting force and munch on bark and roots.

The quills are not poisonous and cannot be shot out like projectiles, Murakami added.