Abe apologizes for remark about ‘meaningless’ questions in Diet 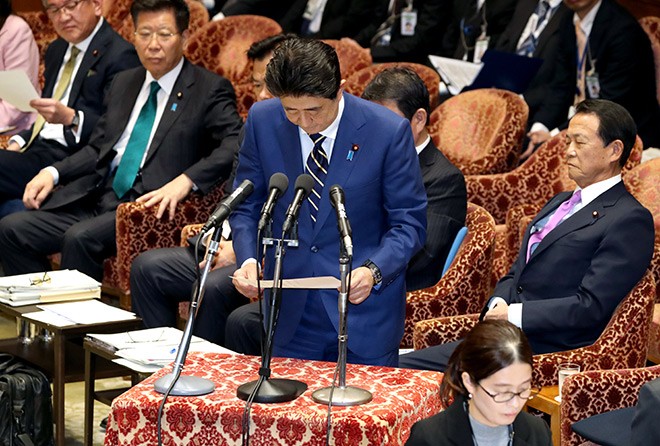 Prime Minister Shinzo Abe on Feb. 17 apologized for belittling an opposition lawmaker who had suggested that government corruption comes from the top.

“I apologize for my irregular remarks,” Abe said at the Lower House Budget Committee session. “I will discipline myself as prime minister and refrain from making such remarks,” referring to his oft-criticized jeering from his seat.

Kiyomi Tsujimoto, a lawmaker of the Constitutional Democratic Party of Japan, criticized Abe at a committee session on Feb. 12, saying: “It is said that a sea bream rots from the head. When the upper ranks become corrupt, the rest also becomes corrupt.”

Abe responded, while seated, saying, “You are asking meaningless questions.”

A Feb. 13 committee session was scrapped over opposition lawmakers’ criticism that Abe’s conduct was making light of the Diet.

Abe initially defended his words by saying that Tsujimoto had heaped “abuse” on him and that he was not given an opportunity to respond.

But after he apologized on Feb. 17, Tsujimoto told the prime minister: “I take your apology as coming from the head of the executive branch for the entire legislative body. I ask you not to do the same thing again.”

Abe did not respond to Tsujimoto.