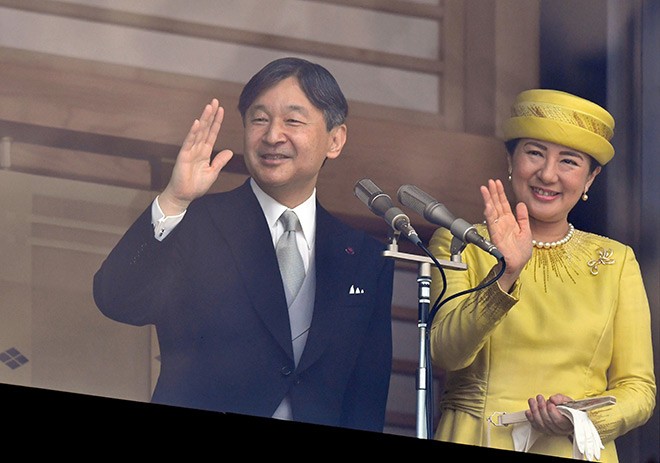 Emperor Naruhito and Empress Masako wave to well-wishers at the Imperial Palace in Tokyo at an event to celebrate Naruhito’s ascension to the throne on May 4, 2019. (Asahi Shimbun file photo)

The Imperial Household Agency is calling off the congratulatory visit to the palace by well-wishers in an effort to stem the spread of the virus.

Feb. 23, which became a national holiday from this year to honor Naruhito's birth, will be his first birthday since he ascended to the Chrysanthemum Throne in May.

On the day of the emperor's birth, it has been customary for the emperor, empress and the rest of the imperial family to make about three appearances on the veranda of the Chowaden hall in the East Gardens of the Imperial Palace.

But as tens of thousands of people were expected to gather at the palace for the occasion, the agency decided the event posed too high a risk for spreading the virus.

According to the agency, 82,850 well-wishers showed up at the Imperial Palace on Akihito’s birthday on Dec. 23, 2018, his last birthday as emperor.

The cancellation of the public birthday event for the emperor will mark the first time since 1996, when it was called off due to the Japanese Embassy hostage crisis that flared up in Peru in December that year.

Although the public gathering will be called off, a ceremony to celebrate Naruhito’s 60th birthday will be held as scheduled with Prime Minister Shinzo Abe and other dignitaries in attendance.