Dishonest Abe? Hotel rebuts his claims on how it handles parties 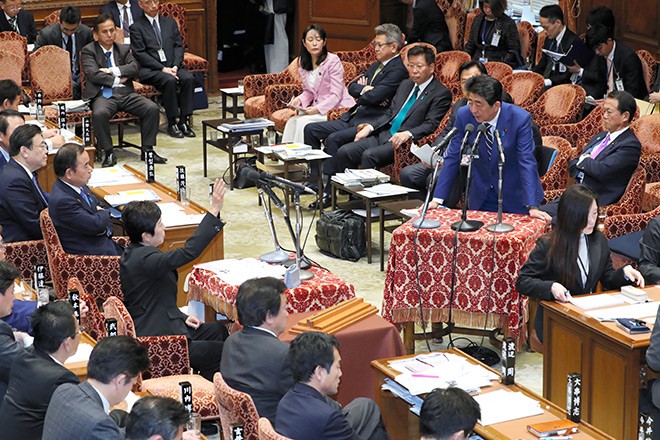 A Tokyo hotel twice rebutted Prime Minister Shinzo Abe’s claims about how it handles receptions, including the parties he has hosted on the eve of the now-highly criticized annual cherry blossom viewing events.

His explanations were rejected by the ANA InterContinental Tokyo in the Ark Hills complex, which hosted the pre-sakura dinner parties in 2013, 2014 and 2016.

Abe until now has insisted the dinner parties at the ANA InterContinental and also the Hotel New Otani were not hosted by his local support organization.

If the support group was indeed the host of the parties and incurred revenues and expenditures, it would have been required under the Political Fund Control Law to list such items in its annual political fund reports.

Abe has said the ANA InterContinental never issued an invoice to his support group for the parties. Instead, according to the prime minister, the hotel issued receipts to all party participants and left the space blank for the guests’ names.

Since each participant paid the fee directly to the hotel, the support organization made no direct payments that would require reporting under the law, Abe said.

However, Kiyomi Tsujimoto, a Lower House member of the opposition Constitutional Democratic Party of Japan, submitted written questions to ANA InterContinental and she said she received an email response on the morning of Feb. 17.

At the Feb. 18 session of the Lower House Budget Committee, she read out the contents.

According to the email, hotel officials said there was “never” a case in which the hotel did not issue a written estimate or an invoice to organizers of a dinner party or reception, and the hotel would never issue receipts to individuals without their names clearly written on the document.

The officials also said all payments for such events are received in total from the organizers, except for parties organized by the hotel itself.

They added that the hotel would not make exceptions in its policies for events hosted by politicians or their affiliated organizations.

Tsujimoto pressed Abe about the major discrepancies between his explanation so far and the responses from the hotel.

In the afternoon session of the Budget Committee, Abe said he had asked his support organization staff to confirm the contents of the email with the hotel.

The prime minister said hotel officials told his staff that the responses sent to Tsujimoto were about how it handled events in general. He added that the hotel said it could not discuss specific events because they involved confidential matters tied to the hotel’s business practices.

Opposition party lawmakers asked Abe to present written responses from the hotel, but he only answered verbally on what he was told by his staff.

However, later on Feb. 17, a public relations official at the ANA InterContinental sent an email in response to questions from The Asahi Shimbun.

The email said that Abe’s staff members were told that the earlier responses were meant as general cases, but no one at the hotel said exceptions had been made for politicians or other individuals.

In addition, the email said no one at the hotel said responses could not be made because of issues related to confidential business practices.

The cherry blossom viewing gatherings hosted by Abe in Tokyo’s Shinjuku district have come under fire as a waste of taxpayer money. Opposition parties say Abe has used the annual event to wine and dine his supporters.

(This article was compiled from reports by Sachiko Miwa, Ryo Aibara and Dai Nagata.)

It looks delicious! Oops, it’s made of paper; man finds fame on Twitter