Emboldened by email, opposition raises attack on Abe over parties 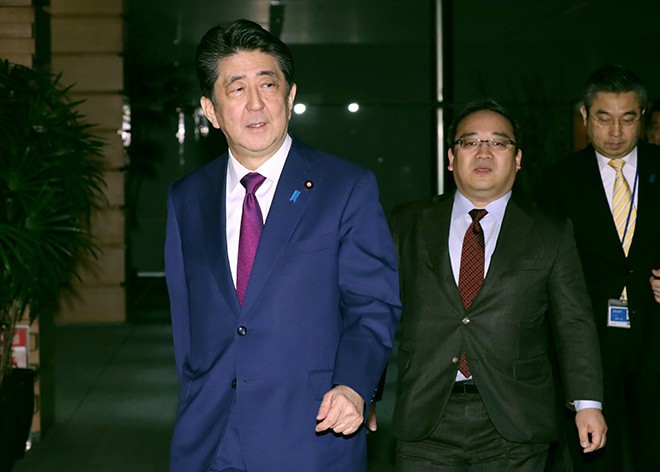 Prime Minister Shinzo Abe leaves his official residence on Feb. 18 and tells reporters that he has nothing more to say about the dinner receptions he has hosted. (Takeshi Iwashita)

Opposition party lawmakers intensified the pressure on Prime Minister Shinzo Abe after his explanation about lavish dinner receptions for his supporters was shot down by the hotel that held the events.

“There is a greater possibility that the prime minister has lied in the explanations he has made until now,” Jun Azumi, the Diet Affairs Committee chairman of the opposition Constitutional Democratic Party of Japan (CDP), told reporters on the morning of Feb. 18.

Even lawmakers of the ruling coalition have questioned why Abe cannot come clean about the dinner receptions.

“It is important for the prime minister, who is directly connected to the event, to fulfill his responsibility to provide an adequate explanation,” Natsuo Yamaguchi, the head of junior coalition partner Komeito, said at a Feb. 18 news conference.

At issue are dinner parties held at the ANA InterContinental Tokyo hotel on the eve of annual cherry blossom viewing events, hosted by the prime minister, in the capital’s Shinjuku Ward.

Although the dinner parties were attended mainly by Abe’s supporters, he has insisted that his support organization was not directly involved in organizing the events.

If the support group had been in charge, it would have been required under the Political Fund Control Law to list revenues and expenditures stemming from the parties in its annual political fund reports.

Abe has insisted that the guests at the dinner receptions paid the fees directly to the hotel, and that his support organization never received an invoice related to the events.

However, an email from the ANA InterContinental Tokyo read in the Diet by opposition lawmakers on Feb. 17 said it always issues written cost estimates and invoices to party organizers, and it denied making an exception for Abe’s support group.

Yukio Edano, the CDP head, tweeted about the hotel’s email: “It overturns the basis used by the prime minister to make his counterarguments and claim, ‘I broke no law.’”

Later on Feb. 17, Abe said the hotel told his staff members that it could not provide details about specific events because of business confidentiality.

However, The Asahi Shimbun received an email from the ANA InterContinental Tokyo on the same day that said no hotel official mentioned anything about confidentiality to Abe’s staff.

“The prime minister has been unable to provide convincing responses in the Diet,” a veteran lawmaker with the ruling Liberal Democratic Party said. “That, along with the verbal insults he has uttered, are not something a prime minister should do.”

Abe rejected opposition lawmakers’ request for a written document containing the essence of the hotel’s response to his staff. That led to an opposition boycott of the Feb. 18 morning session of the Lower House Budget Committee.

To persuade opposition lawmakers to return to the deliberations, LDP lawmakers questioned Abe’s staff. But the Diet members said they could not confirm if hotel officials had mentioned business confidentiality.

Although the opposition lawmakers attended the afternoon session of the Lower House Budget Committee, they made clear that they would continue to press Abe to give an honest explanation.

Such pressure creates a major dilemma for Abe.

If he remains silent, opposition parties will likely refuse to deliberate the fiscal 2020 budget on grounds they cannot accept explanations from a prime minister who has repeatedly lied.

But if Abe acknowledges that the ANA InterContinental Hotel was telling the truth, his support organization could find itself accused of violating the Political Fund Control Law.

(This article was compiled from reports by Sachiko Miwa, Shinobu Konno and Dai Nagata.)