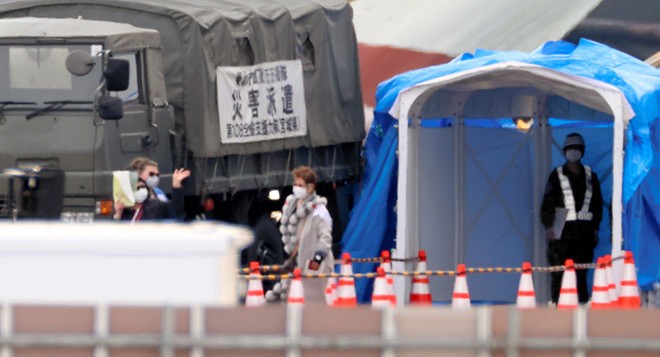 YOKOHAMA--Uninfected passengers began disembarking from the quarantined cruise ship Diamond Princess on Feb. 19, ending a two-week ordeal on the vessel that saw hundreds of cases of new coronavirus infection.

Only passengers who had tested negative and showed no symptoms of infection, such as fever or coughs, were allowed to leave. They began disembarking from around 11 a.m.

"I am relieved," a 77-year-old resident of Tokyo's Minato Ward told reporters after leaving the ship with his wife.

Authorities said about 500 passengers were due to leave on Feb. 19, and that the process would continue until Feb. 21. Priority was given to elderly passengers who were tested in the early stages of the crisis.

The passengers were transported on buses arranged by the cruise ship operator to major train hubs such as Yokohama Station, where they were to make their own way home on public transportation.

Health ministry officials ensured that all disembarking passengers checked their temperature and health condition before leaving the ship.

All of the passengers have now been tested for the virus, and those in the clear will be allowed to disembark in stages.

For many passengers, the 14-day quarantine period on the vessel imposed Feb. 5 ended Feb. 19.

However, passengers who tested negative for the virus but had shared cabins on the ship with those who proved positive are expected to only be allowed to disembark on or after Feb. 22.

Among the 3,711 passengers and crew, 542 people were found to be infected with the new coronavirus as of Feb. 18, although nearly half of them displayed no symptoms.

Authorities said 2,404 people took the virus test and that 25 people are in serious condition.

Those with minor coronavirus symptoms can recover at home