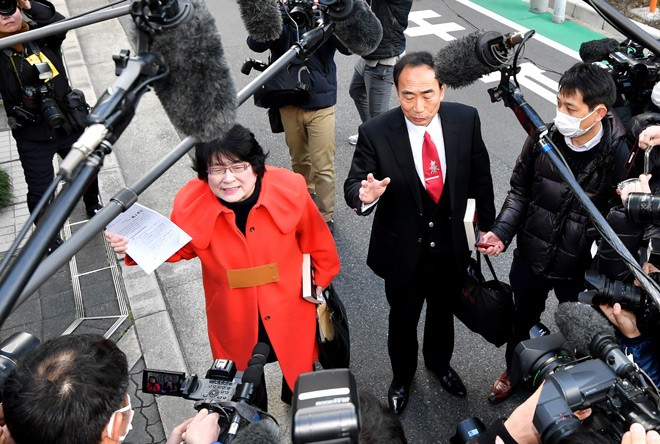 Yasunori Kagoike, center, and his wife, Junko, left, enter the Osaka District Court on Feb. 19 to hear the verdict in their fraud trial. (Tatsuo Kanai)

OSAKA--The former head of an educational institution who once boasted of his close ties to Prime Minister Shinzo Abe and his wife was sentenced to five years in prison for fraud on Feb. 19.

Yasunori Kagoike, 67, and his wife, Junko, 63, were charged with defrauding the central and local governments out of about 170 million yen ($1.5 million) in subsidies.

“The method used was clever and bold, and the amount of damage was huge,” Presiding Judge Takushi Noguchi said in handing down the ruling at the Osaka District Court.

Junko was given a three-year sentence, suspended for five years. She was found guilty of defrauding the central government but not the Osaka prefectural and municipal governments.

The Kagoikes once operated the Moritomo Gakuen institution, which had planned to open a private elementary school in Toyonaka, Osaka Prefecture, on land bought from the government.

That purchase, at a steep discount, led to a still-unresolved scandal concerning suspected cronyism by the Abes.

According to the ruling, the Kagoikes in February 2016 inflated the amount for school construction costs in a contract submitted as part of an application to the central government, and defrauded it of about 56 million yen in subsidies.

The couple was also accused of defrauding the Osaka prefectural and municipal governments out of about 120 million yen in subsidies between fiscal 2011 and 2016 by falsely claiming that a Moritomo Gakuen-operated kindergarten provided special support to children with illnesses or disabilities.

Prosecutors argued that the Kagoikes played a leading role in submitting the subsidy application to the central government and had ordered the company designing the elementary school to falsify figures in the contract.

Regarding the subsidies from the local governments, prosecutors said Junko was in charge of overseeing finances at Moritomo Gakuen and was thus clearly aware that the educational institution was defrauding the prefectural and municipal governments.

Defense lawyers argued unsuccessfully that the design company had compiled the construction costs listed in the contract that was used to apply for the central government subsidy. They also said that because the figure was only an estimate, there was no intent on the part of the Kagoikes to defraud the central government.

The couple had denied most of the allegations against them in the indictment.

Despite the trial, it remains unclear why Moritomo was given such a sharp discount to buy the state-owned land.

The land was sold for 134 million yen after about 800 million yen was slashed from the appraised value of the land.

Speculation arose that the ties between the Kagoikes and the Abes were behind the price reduction. Akie had been named honorary principal of the planned elementary school and the Kagoikes took a photo with her at the site.

Government officials claimed the discount was made to cover the expenses to remove waste found underground at the site. But it was never made clear if the land was contaminated by a large volume of underground waste that would require such an outlay.

Even Yasunori admitted that a large volume of waste never existed at the site.

He also claimed to have received a 1-million-yen donation from Akie that she said was from her husband.

However, Abe denied making such a donation and Akie herself denied the allegation on her Facebook account.

(This article was compiled from reports by Yuto Yoneda, Chinami Tajika and Haruhiko Yoshimura.)

China Created a Fail-Safe System to Track Contagions. It Failed.