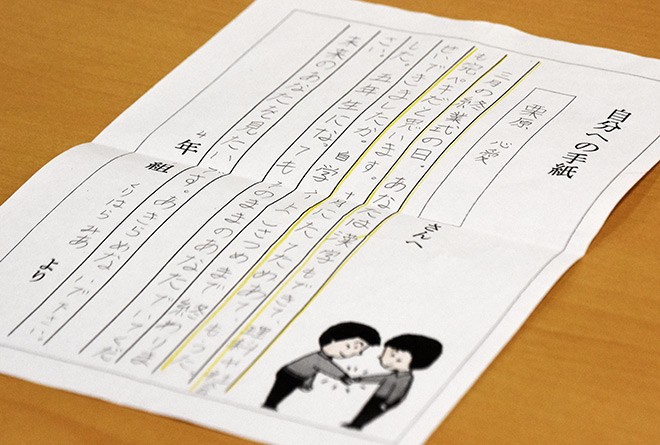 A letter that Mia Kurihara, 10, wrote to her future self in October 2018, three months before she died from her father’s abuse in Noda, Chiba Prefecture. (Erika Matsumoto)

KASHIWA, Chiba Prefecture--In the depths of her despair, a 10-year-old girl fatally abused by her father wrote an inspirational message to her future self.

“Dear Mia Kurihara,” the letter, written in October 2018, starts out.

The letter was a class assignment at the elementary school Mia attended in Noda, Chiba Prefecture. The children were told to set goals and decide whether they had achieved them at the closing ceremony that marks the end of the school year in March.

“I’m sure you will excel in kanji, and nail it in science and social studies classes, too,” the girl wrote.

Mia, a fourth-grader, envisioned how she would excel academically on the final day of the school year.

“Have you achieved the goals you set in October already?” she asked.

“I want you to stay just the way you are now after you get into fifth grade.”

The next paragraph started: “I want to see you of the future. Please don’t give up.”

Her father, Yuichiro Kurihara, 42, was arrested for inflicting bodily injury resulting in death.

His first trial hearing is scheduled to begin on Feb. 21.

‘SHOULD HAVE WATCHED MORE CAREFULLY’

Mia’s 68-year-old paternal grandmother only learned of the letter when she was summoned to Mia’s elementary school on March 27, 2019.

It remains one of her treasured possessions. The woman told reporters Feb. 18 that the letter invoked deep feelings of remorse in her and said she prayed her son would tell the truth in court.

The assistant principal of the school called the grandmother to collect Mia’s report card.

Along with the report card and letters from classmates, the grandmother found the “Letter to my future self.”

The grandmother said she couldn’t stop weeping when she read it.

“I didn't understand how (Mia) felt,” the tearful grandmother said.

“I should have watched her more carefully. I am so sorry. We, too, wanted to see her of the future.”

Mia moved from Itoman, Okinawa Prefecture, to Noda to live with her paternal grandparents in August 2017.

The grandmother hadn’t seen Mia since shortly after she was born.

“It was all a bit confusing at first, but gradually we became a family,” she said.

After moving out of her grandparents’ home, Mia wrote in a questionnaire at her elementary school that she was physically abused by her father in November.

She was temporarily taken into a custody by a child welfare center in Kashiwa in the prefecture.

On Dec. 27, the center released Mia on condition that she stayed with paternal grandparents.

That lasted for about two months. In early March 2018, Mia was living with her parents again.

In September, Mia begged her mother not to take her home to face more abuse.

Mia’s mother, who was convicted for aiding and abetting her husband in his abuse, allowed Mia to live with her paternal grandparents again for about four months.

The grandmother recalled that Mia took her younger cousin under her wing and often asked for another serving of the grandmother’s homemade kinpira-style sauteed burdock root.

Mia liked music class at school, telling her grandmother, “I will join a brass band club when I get into fifth grade.”

“She wasn’t good at P.E., but she worked hard at it. She was indeed growing,” the grandmother said through her tears.

The grandmother recalled her son, Kurihara, telling her that he “wanted to make a go (of the marriage) this time around,” referring to the fact that he had separated from his wife and child before.

“It’s wrong that Mia's death was the result,” she said. “I want him to apologize to Mia.”

During the trial of Mia’s mother last year, it became apparent that Mia had told her paternal grandparents she had been beaten by Kurihara and sought their help.

But the grandparents didn't alert child welfare authorities or the police.

“I didn't understand what abuse meant and might not have recognized it was happening," the grandmother said Feb. 18. "I should probably have let (Mia) stay at our home.”

She said she is determined to attend the trial of her son whenever she can and see the process through to the end.

“I want (him) to face up to what he did. I want to hear him say why it happened and what happened. And I want to tell him that I want Mia back.”

Kurihara's trial will get under way at the Chiba District Court on Feb. 21.

According to the written indictment, Kurihara subjected his daughter to severe physical abuse at the home in Noda from around Dec. 30, 2018, to Jan. 3, 2019. He inflicted bodily injury that resulted in broken bones in Mia's ribcage.

From Jan. 22 to Jan. 24, Kurihara did not permit Mia to get a full night's sleep. He forced her to stand in a bathroom at home and poured cold water over her repeatedly. He also put her on a near-starvation diet.

Mia is believed to have died from shock, irregular heartbeat or possibly drowning.

Kurihara was arrested on Jan. 25. He initially told police that his actions were to instill “discipline” in his daughter, according to sources close to the investigation.

But, later, he changed the statement and insisted, “I don’t remember.”

The court is expected to conclude its proceedings on March 9 and issue a ruling later.

(This article was written by Erika Matsumoto, Norio Kamijima and Susumu Imaizumi.)