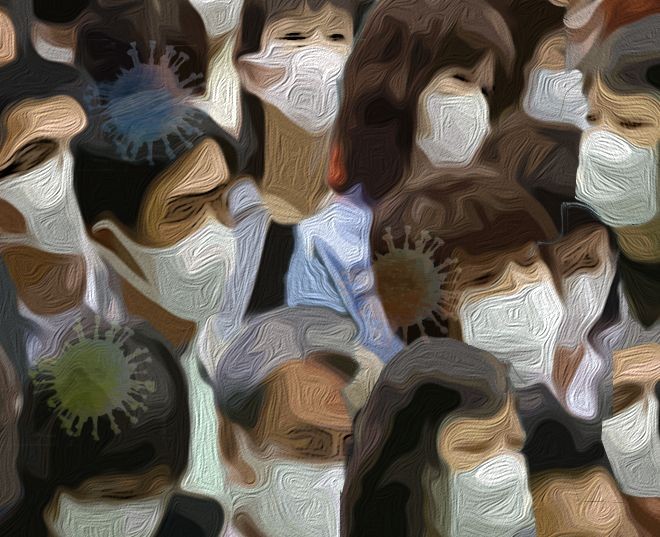 withered magnolia my calm down and carry on pills
--Eva Limbach (Saarbrucken, Germany)

pregnancy test ...
after the snow has melted
a red cyclamen
--Carmela Marino (Rome)

argument over
the snow on the roof
thawing
--Roger Watson (Hull, U.K.)

After the feasts
the icicles growing
night by night
--Vasile Moldovan (Bucharest, Romania)

Worried sick by COVID-19, the haikuist telephoned his family in China. Spotting twin devils atop a local temple in Nagoya, Satoru Kanematsu prayed “they scare the coronavirus invading from China.” Kiyoshi Fukuzawa wrapped up for battle in Tokyo. Teiichi Suzuki endured the coldness of an isolated Buddhist retreat atop Mount Koya.

Coronavirus
having wished the grounds were clean--
no students this spring

Icicles
keep time one by one
sandglass tea

Roger Watson said that the writing of haiku is one of the few things that can take his mind off his academic work as a professor of nursing. Professor emeritus Horst Ludwig laments there are only two seasons in St. Peter, Minnesota: snow removal and road repair.

Hifsa Ashraf empathized with an effort to live what remains of life as comfortably and fully as possible.

hospice garden ...
she collects the loose petals
of magnolia blossom

Francis Attard tucked into a late dinner in Marsa, Malta: sea slug wedge of waning moon nightfall. Dina Towbin stayed snug as a bug in a rug in Washington, D.C.

The covers hug me,
The warm embrace of soft sleep.
Slipping into night.

Mario Massimo Zontini wrote this one-line verse as he slowly roused himself: late is the first snow this year so are my thoughts. Marek Kozubek hung onto his lover’s every word.

Alegria Imperial awoke to a lone sparrow perched on the fragile tip of a pine; noting that “Clumps of once thick rose blooms, hydrangeas and magnolias now seem like a dream, fallen and sopped into mulch under their skeletal twigs.”

John Daleiden combined haiku with prose to create haibun, a short story about driving in Phoenix, Arizona. Or, perhaps it was an alien abduction? He mused, “At 7:30 am shortly after sunrise, little traffic traveled along the straight-as-an-arrow highway. The fresh morning light played over the sand dunes on the north side of the empty four lane road. As I glanced at the unblemished sand dunes on my left I observed a wave-line pattern the wind had created. Some primary force occupied my being.”

helpless captive,
suspended in a time-warp--
the desert transforms

Shivering, Kanematsu was lured by the welcome sight of a bright red Japanese chochin and the succulent smell of skewered chicken on a bamboo stick barbequing over charcoal. Tempted to stand up and dance during the musical “Saturday Night Fever,” Murasaki Sagano hesitated because “most of the audience, as well as me, were over middle age.” Nadejda Kostadinova saw haiku shine everywhere in Sofia, Bulgaria.

sparkles in the snow
these little
aha moments

On your hands
the scent of oranges--
freezing moon

This haiku by Yuto Takahashi, a third-year medical student, was ranked first in a contest held at Kagawa University. The judge, Ian Willey, remarked that the ephemeral moment described in the haiku was “the most memorable of all the contest entries.”

A haiku by the winner’s classmate, Atsumi Miyazaki, placed second for its “fleeting moment” because it is, the judge noted, “the smaller moments of the day that make for stronger haiku.”

John Levi brought this colorful haiku out from under a shade tree. Masumi Orihara cared for a blossom as if it were the daughter of a noble family.

Orihara’s magnolia buds but rarely blooms. Kristen Lindquist watched as a tree was stripped of its color.

the apple blossoms
ravaged by waxwings
I can’t look away

Reading through poems left behind by Sydell Rosenberg in 1968, Amy Losak found this little delight from her mother.

Today’s issue is dripping with haiku at http://www.asahi.com/ajw/special/haiku/. The next issues of the Asahi Haikuist Network appear March 6 and 20. Readers are invited to send haiku about dolls or the vernal equinox on a postcard to David McMurray at the International University of Kagoshima, Sakanoue 8-34-1, Kagoshima, 891-0197, Japan, or by e-mail to (mcmurray@fka.att.ne.jp).