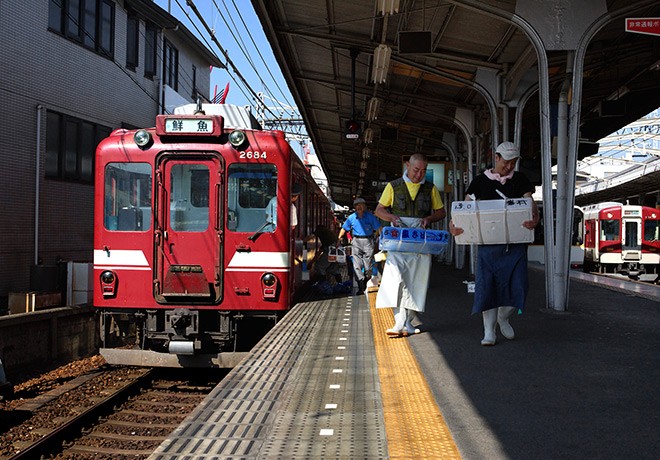 Merchants carry seafood on a station platform in Osaka on an early morning in August 2006. The train's destination board says "fresh fish." (Asahi Shimbun file photo)

The railway operator said on Feb. 18 that the train’s last run will be on March 13.

The three-car train, reformed from a commuter train, started operating in 1963 and gained the “fresh fish” nickname because it carried merchants and marine products, such as “ise-ebi” (Japanese spiny lobster) and “awabi” (abalone), from the Ise-Shima area of Mie Prefecture to the Kansai region.

The fish train has run daily except on Sundays and holidays.

At its peak, about 100 merchants a day used the train. But after trucks became the common means of transporting seafood, the daily number dropped to about 10 in recent years.

The train now in use was built in 1971, and it is showing signs of wear and tear.

Kinki Nippon Railway decided to abolish the service when it revises the train timetable in spring.

After March 16, the company will attach an extra car for seafood to a normal train that runs from Matsusaka Station to Osaka-Uehommachi Station.

The new one-way service to Osaka will operate only once on weekday mornings.

The extra car will feature designs of fish from the Ise-Shima area, the company said.

Police scramble for ways to protect victims at empty ‘koban’