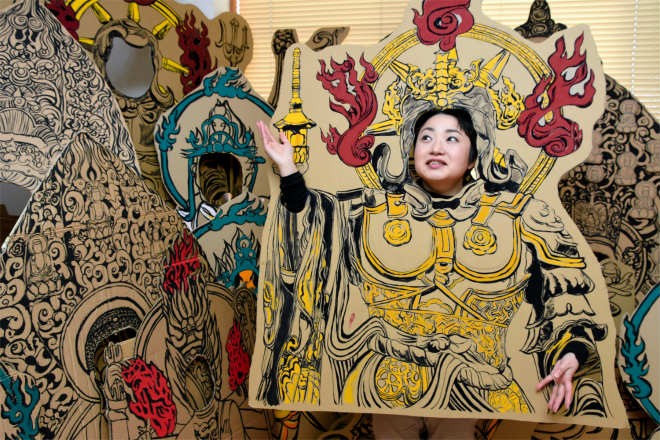 Nishiyuki uses a comic foreground based on Vaisravana on Feb. 10 in Kurashiki, Okayama Prefecture. (Yuki Hanano)

KURASHIKI, Okayama Prefecture--She doesn’t practice Buddhism and once had a strong aversion to painting, but artist Nishiyuki has found a way to transform temple visitors into sacred figures of the religion.

Nishiyuki, 42, who goes by only one name, has been creating comic foregrounds, or cardboard figures with the face cut out, based on Buddhist statues for seven years.

It all started when she decided to turn herself into a work of art.

Her studio here contains 30 colorful comic foregrounds featuring Acala, Bhaisajyaguru, Mahavairocana and other Buddhist images. One of them stands taller than 150 centimeters; another is equipped with a halo created with a utility knife.

The surface of the cardboard is covered in acrylic paint and gives off a golden shine.

Nishiyuki carries the cardboard works to costume events throughout the country and posts photos of herself inserting her face into the cutouts on her Instagram account.

For each Buddhism figure she creates, Nishiyuki studies its history and background, and she starts the work only when she feels the time is right.

She makes facial sketches even though the faces are sliced out in the end.

“I cannot help but depict the face because I work while feeling the existence of the Buddhist figure,” Nishiyuki said. “I feel terrible pain as if I’m cutting myself (when the face is removed with a knife).”

Nishiyuki loved painting in her childhood and dabbled in oils at school.

With no interest in Japan’s traditional culture, she instead majored in European culture at college.

After graduating, Nishiyuki continued oil painting while working at a museum and elsewhere.

But when she was in her mid-20s, Nishiyuki suddenly became unable to visualize what she planned to paint, and just looking at canvases made her feel ill.

Struggling to develop “a new way of expression,” she thought about “converting myself into artworks.”

She started with animal suits made of cloth and asked a friend to create costumes of a bee, dog and fowl based on her sketches. She planned to use images of herself wearing the costumes for a calendar.

“I was very excited then,” Nishiyuki said. “It may not sound true given the struggle, but I quickly felt the strong urge to create something.”

Around that time, Nishiyuki was moved by the beauty of Buddha statues when she visited Toji temple in Kyoto alone. She was especially impressed by the statue of Shakra devanam Indra in the 21-figure mandala.

Wanting to change herself and recreate the attractive statues, Nishiyuki in 2013 started making comic foregrounds.

She became so absorbed in the new form of art that she didn’t realize that she had been reproducing Buddhist figures for seven years.

When she sees people trying out her cutouts at events, Nishiyuki recommends one that matches the individual’s personality simply by asking, “How are you?”

Nishiyuki said she feels a sense of achievement when her art pieces bring warm smiles to people’s faces.

Nishiyuki initially feared that she “may be criticized because I am not a Buddhism believer.” But the worries were unfounded. She is currently invited to events at temples in Kobe, Osaka and other cities.

In April last year, Nishiyuki was asked to join a festival at Hokeiji temple in Akaiwa, Okayama Prefecture.

“We hope that people who try the cutouts will become familiar with the Buddhist figures,” said Josei Sekito, 49, chief priest of Hokeiji, explaining why the temple invited the artist.

Nishiyuki said her current goal is reproducing the remaining four statues in the 21-figure mandala by the end of this year.

“The signboards are perfected when people insert their faces,” she said. “Trying them may enable you to find a new self.”

For more details on her works, contact Nishiyuki by e-mail at (info@nisiyukiten.com).