Experts in doubt after economy again assessed as ‘recovering’ 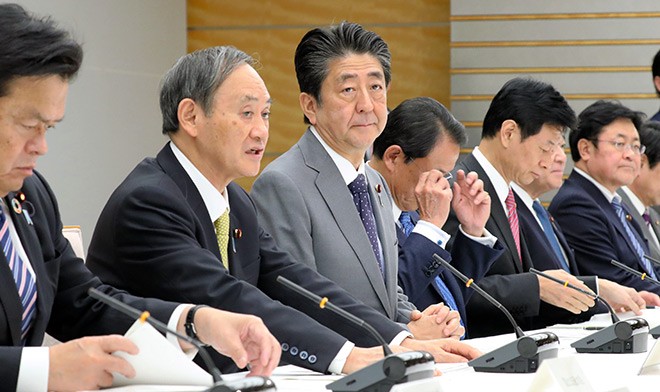 The Japanese economy is “recovering at a moderate pace,” the government said in a report that was immediately criticized as overly optimistic and simply unbelievable in some areas.

The overall assessment of the economy, shown in the Monthly Economic Report for February released by the Cabinet Office on Feb. 20, is the same one the government has given since January 2018.

The latest report came after the Feb. 18 release of preliminary figures that said seasonally-adjusted gross domestic product contracted by an annualized 6.3 percent in the October-December period of 2019, worse than the 4-percent drop that had been predicted by many economists. It was the first contraction in five quarters.

As for imports, the government downgraded its assessment for the first time in 13 months, saying they are in a “weak tone,” compared with “almost flat” in the January and previous reports.

The February report cited the spread of the new coronavirus as a concern for the Japanese economy.

But consumer sentiment following the consumption tax rate hike to 10 percent from 8 percent in October was omitted as a factor that could derail the economy.

The monthly reports from October to January had all referred to post-tax hike consumer sentiment as a potential negative for the economy.

The government has maintained its recovery path assessment for two years based on its assumption that domestic demand will fuel economic growth as the employment and income situations are improving.

Consumer spending, which accounts for about half of GDP, is “picking up,” according to the February report.

However, weak consumer spending was cited as a main cause for the sharp GDP contraction in the last quarter of 2019.

“The government’s assessment is too optimistic,” said Koichi Fujishiro, a senior economist at the Dai-ichi Life Research Institute. “A larger-than-expected gap emerged between before and after the consumption tax rate hike, and there is no way the government can say that private consumption is ‘picking up.’”

A family income and expenditure survey conducted by the internal affairs ministry showed that spending from households with at least two people plunged by 4.8 percent in December from the same month in 2018.

The year-on-year decline was sharper in October, at 5.1 percent, but it improved somewhat in November.

“Given the reality of consumer spending, it would be appropriate to assess the economy as ‘at a standstill,’” Fujishiro said.

Toru Suehiro, a senior market economist at Mizuho Securities Co., said bureaucrats tend to use optimistic words under the Abe administration, which has pitched its economic policy as a top priority.

“Bureaucrats could mislead if they take into account what each administration wants to hear,” said Suehiro, who has studied changes in the government’s assessments before and after Abe returned to power in December 2012.

“An overly optimistic assessment could have a negative impact on businesses about the timing of equipment investment and other decisions.” Suehiro said.

As for the omission of post-tax hike consumer sentiment in the report, a senior official at the Cabinet Office noted that the sales tax was raised amid criticism that the higher levy would cause the economy to sputter.

“But the government would never acknowledge that the economy could slacken due to the tax raise,” the official said.

Abe set to declare state of emergency for Tokyo, Osaka