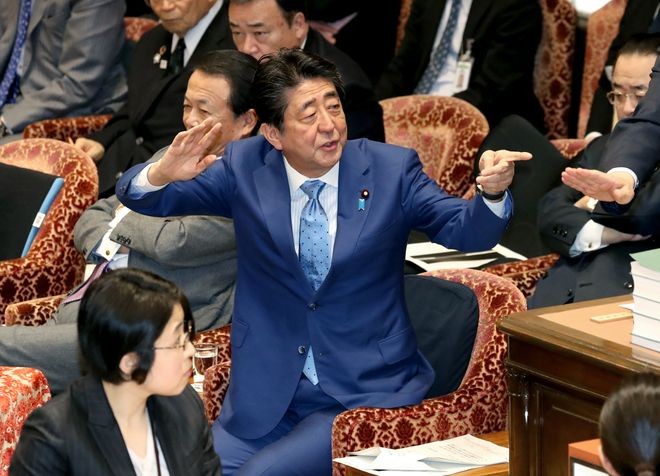 Yet another discrepancy has arisen over Prime Minister Shinzo Abe’s recollections of how annual cherry blossom viewing gatherings he hosted were handled.

The Cabinet Office and other government officials have vehemently denied his assertion that it had the final say on who should be invited to the events.

Abe has had to revise a number of past statements regarding the large number of his supporters who received invitations to the taxpayer-funded event at Shinjuku Gyoen National Garden in Tokyo.

When pressed by opposition lawmakers last November, Abe said his local office was in no way involved in the decision about who to invite.

But reports surfaced that his local office had sent out brochures to supporters about joining a group tour that included participation in the sakura viewing party. Chief Cabinet Secretary Yoshihide Suga was forced to admit that several thousand invitations were based on recommendations that he himself had made or were from Abe, Finance Minister Taro Aso and other influential politicians in the ruling Liberal Democratic Party.

The cherry blossom viewing gathering was originally begun to express appreciation to individuals in various fields for their achievements and endeavors over the years.

When Abe was criticized for having so many of his local supporters wined and dined in Tokyo at public expense, he responded that his local office drew up the list of those it felt were deserving but that a final assessment of those individuals' contributions was made by the Cabinet Office.

However, a number of government officials, including some closely involved in the process of compiling the roster of participants and sending out the invitations, said it was their understanding that the politicians who made the recommendations were responsible for confirming that the prospective participants had indeed made lasting contributions to society.

Of the 15,000 or so invitees to last year’s gathering, about 8,000 were based on recommendations by politicians.

Moreover, the process by which Abe’s local office in Yamaguchi Prefecture recruited participants indicates that the primary factor appeared to be that the individual was a backer of the prime minister.

In January and February, application forms to attend the cherry blossom viewing gathering in April were sent out to local supporters.

The form asked applicants to fill out their names, addresses, occupations and positions, but there was no space to detail their achievements and endeavors.

There was also a note on the form that encouraged individuals to also use copies of the form, meaning there was a possibility of an almost endless number of potential applications.

Regarding the final assessment by the Cabinet Office, a number of government officials said that was left up to those recommending who should participate.

One official, responding to questions from The Asahi Shimbun, said, “The Cabinet Office never conducted a thorough assessment.”

The compilation of the roster of participants was mainly handled by two bureaucrats in the personnel division of the Cabinet Office. One official who was involved in the process said, “All we could do was simply glance over the names.”

Another government source said the recommendations made by politicians had nothing to do with the achievements of the individuals invited.

Moreover, a number of officials who once headed the Cabinet Office’s personnel division admitted to having never seen the roster of invitees, indicating that strict oversight was not a major concern.

Abe himself had to admit that problems existed in the process of sending out invitations. At a Jan. 28 session of the Upper House Budget Committee, an opposition lawmaker pointed out that Abe’s local supporters received letters thanking them for deciding to take part in the cherry blossom gathering even before the official invitations were sent out by the Cabinet Office.

Abe said the wording in the letters was “inappropriate” as it totally ignored the process by which invitations are sent out.

The controversy over past cherry blossom viewing sessions led the government to cancel this year’s event.

(This article was written by Hiroyuki Kamisawa, Yuichi Nobira and Takashi Narazaki.)