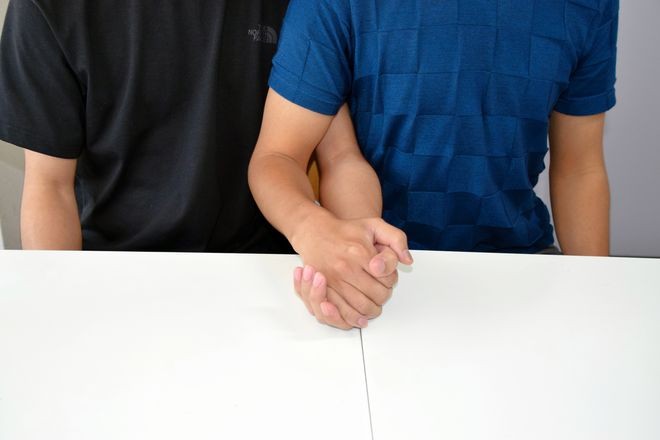 This gay couple started dating after finding each other through matchmaking service provider Resally's Tokyo branch in Shibuya Ward. "I got up the nerve and took a step forward," one of them said. (Yukiko Yamane)

When a 30-year-old gay engineer wanted to find the love of his life, he turned to one of the growing number of matchmaking services in Japan for sexual minorities.

"I wanted to have a serious relationship and find a partner with whom I could spend the rest of my life," the man said.

He met a 26-year-old male researcher at the Tokyo branch of Resally in Shibuya Ward, which provides a matchmaking service for gay people. The pair started dating last summer.

Such services as Resally operate marriage agencies and host matchmaking parties, increasing their membership and drawing in participants.

Resally started its service in 2016. Based on the age, height, self-introduction and other information provided by its members, matchmakers arrange meetings between potential couples once to three times a month.

The company had 160 members in 2016, but the number has now grown to about 500. It has helped 110 couples find love. It opened an Osaka branch in February.

"I thought sexual minorities also want to be with someone for a long time, so we started our service to help them find partners," said Resally President Yoichi Tobita, 52.

The membership continues to grow as its service has gained recognition while a growing number of local governments have introduced the same-sex partnership system, the president said. Some clients visit the company's offices for a consultation and bring along their mothers, he added.

EXEO Japan, a wedding services provider based in Yokohama, has been hosting matchmaking parties for gay and lesbian people since 2016. The number of participants per party doubled from 2016, attracting a cumulative total of 1,000 participants, the company said.

According to an online survey conducted by the Japan LGBT Research Institute Inc. in 2019 covering about 420,000 people in their 20s through 60s across the country, about 10 percent of the people identify with being LGBT (lesbian, gay, bisexual and transgender) and sexual minorities.

"In addition to the fact that sexual minorities account for a low percentage, many of them choose not to disclose their sexual orientation, limiting their chances to find partners," said Kazuhiro Terada, 46, president of Equal Marriage Alliance, a nonprofit advocate of the legalization of same-sex marriages.

Such circumstances may have been an underlying cause of the expansion of matchmaking services for sexual minorities, he added.

However, same-sex partners are faced with a variety of legal disadvantages because same-sex marriages are not legally recognized. For example, they are not allowed to be each other's heir or covered by spousal tax deductions.

A company employee in his 30s joined Bridge Lounge because he thought he would end up living a lonely life if he couldn't find a partner. But he also said he feels anxious about being unable to legally marry a same-sex partner.