Medical staff responding to virus bullied in the workplace 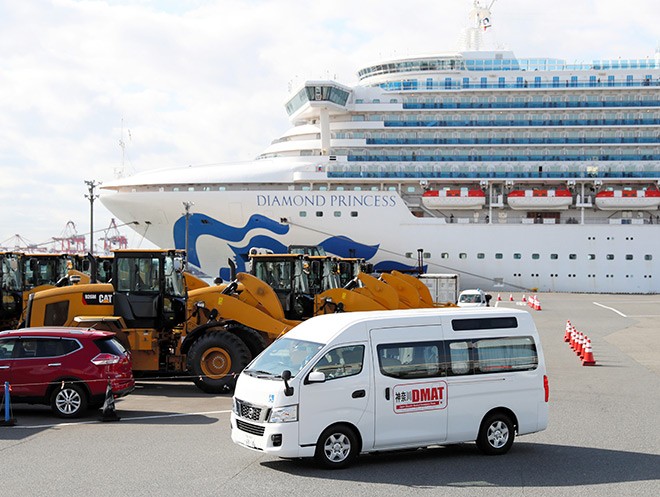 Emergency vehicles from the Disaster Medical Assistance Team are parked at Yokohama Port where the stricken Diamond Princess cruise ship is docked on Feb. 19. (Takuya Tanabe)

Doctors and nurses in Japan who put themselves on the front line to fight the spread of the coronavirus are now being treated like "germs" and subjected to bullying in and outside of their workplaces.

The Japanese Association for Disaster Medicine strongly protested the treatment by their colleagues and others and called for corrective action in a statement released Feb. 22.

“Their situation should be taken seriously as a human rights issue, and we strongly protest and demand the situation be corrected,” the association said.

The medical professionals who attended to Japanese evacuees from China and passengers aboard the stricken Diamond Princess cruise ship were members of the Disaster Medical Assistance Team (DMAT).

The DMAT responded to hundreds of Japanese airlifted from Wuhan, epicenter of the new coronavirus outbreak, on chartered planes since late last month. Members also went aboard the cruise ship as nearly 4,000 passengers and crew members were under quarantine for two weeks at Yokohama Port from early this month.

The association also said in addition to a flurry of reports on bullying, an individual was asked by a superior to apologize for taking part in the emergency mission.

In the statement, the association said that more people might have died after developing severe symptoms of COVID-19, the disease caused by the virus, without their commitment and dedication.

The association said despite the DMAT members risking their lives to contain the disease, they have been treated like germs upon returning to their workplaces.

Their children were asked to refrain from attending nursery schools and kindergartens by school officials.

A similar occurrence was reported by Sagamihara Chuo Hospital in Sagamihara, Kanagawa Prefecture, where the infection of a nurse was confirmed. The nurse was tending to a patient who was the first to die in Japan of the new coronavirus.

The city government said in a statement issued earlier this month that hospital employees and their children have been experiencing discrimination due to the case, which received heavy media coverage.

The association was formed by doctors, nurses and emergency responders in 1995 when the Great Hanshin Earthquake struck Kobe and the surrounding area.