Number of coronavirus cases in Japan grows to 770 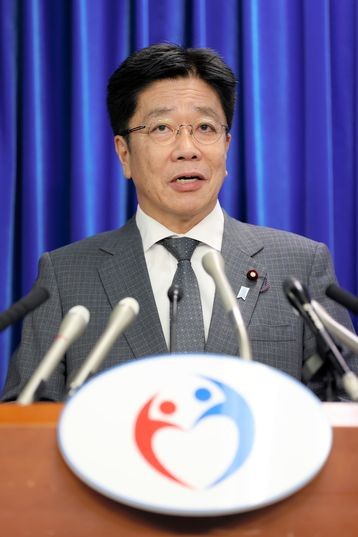 Health minister Katsunobu Kato at a news conference in Tokyo on Feb. 22 (The AsahiShimbun)

Japan's health minister has apologized after a woman who was allowed to leave a coronavirus-infected cruise ship docked near Tokyo tested positive for the virus.

The woman in her 60s disembarked the Diamond Princess in Yokohama on Wednesday following a two-week quarantine on board, but was found to be positive following another test in Tochigi Prefecture, north of Tokyo.

Health Minister Katsunobu Kato told a news conference in Tokyo on Saturday evening that 23 people who had disembarked on Wednesday and Thursday had not undergone tests since before Feb. 5, and the ministry was trying to reach them for retesting.

"We deeply apologize for the situation caused by our oversight," Kato said. "We will take all necessary measures, like double checks, to prevent a recurrence."

The cruise ship, owned by Carnival Corp, and carrying some 3,700 passengers and crew representing more than a dozen nationalities, has been quarantined in Yokohama since Feb. 3.

Japan's government is facing growing questions about whether it is doing enough to stop the spread of the flu-like virus, which originated in China and has killed more than 2,400, as Tokyo prepares to host the 2020 Summer Olympics in July.

Prime Minister Shinzo Abe said at a meeting on combating the disease Sunday that it was necessary to urgently prepare medical provisions to prevent people from developing severe illness, a news agency reported. He also instructed health minister Kato to formulate a comprehensive policy to prevent the spread of infection.

The U.S. State Department raised its travel advisory for Japan to Level 2 on its four-notch scale on Saturday because of what it termed "sustained community spread."

The number of cases in Japan grew to 770 as of midday on Sunday, including the cruise ship, after a man in his 70s tested positive in the northern prefecture of Hokkaido, national broadcaster NHK reported.

On the Diamond Princess alone, there have been 634 infections, according to NHK. That is the largest concentration outside China.

Among new cases on Saturday was a boy under 10 years old in Hokkaido, which has the largest number of cases at 18 outside of Tokyo's 29, NHK said.

Children had been thought to possibly be less vulnerable to the new virus, with far fewer reported infections in much younger people.

A quarantine officer at a Hokkaido airport also tested positive on Saturday.

Another was a teacher in Chiba Prefecture east of Tokyo who had gone to school despite showing symptoms.

An expressway operator in Nagoya, central Japan, closed six toll gates on Sunday after a worker tested positive for the virus, leading it to ask other employees to stay home, NHK reported.