EDITORIAL: Abe’s credibility, excuses are as fleeting as a cherry blossom 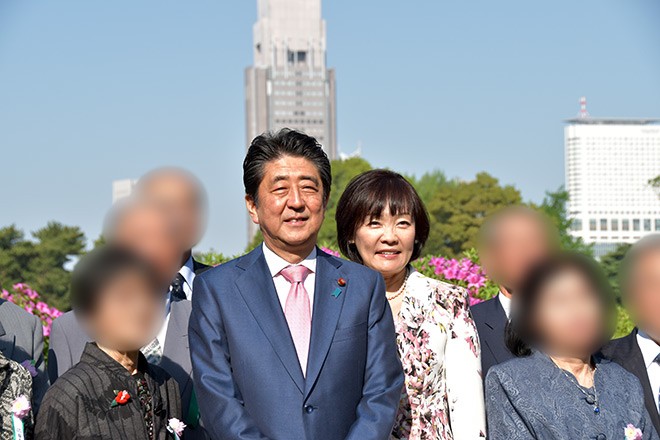 Photo: Prime Minister Shinzo Abe and his wife, Akie, pose with guests at a cherry blossom viewing gathering at the Shinjuku Gyoen National Garden in April 2018. (Provided by a participant)

With yet another discrepancy arising over Prime Minister Shinzo Abe’s accounts, it is obvious that his chicaneries on insisting he did nothing problematic have fallen apart.

The credibility of the nation’s political leader is coming under question in what can only be described as a serious situation.

Questions arose over whether guests invited to the government’s cherry blossom viewing gatherings on the recommendation of Abe and other politicians had really made “achievements and endeavors” worthy of the stated objective of the annual taxpayer-funded events.

Abe has so far told the Diet that the Cabinet Office had the final say on who should be invited. But some government officials have told The Asahi Shimbun that those invited through the “politicians’ quota” went practically unchecked.

Invitees to the cherry blossom viewing events surged in number following Abe’s comeback as prime minister in 2012. His local office in Yamaguchi Prefecture called for a broad array of people with connections to his support group to take part in the sakura parties held in Tokyo.

Still, Abe has cited the Cabinet Office’s final checks to dismiss criticism that he was using the public events to wine and dine his supporters. If the testimonies of government officials are true, however, that means Abe’s explanations were nothing but mere subterfuge.

Abe’s accounts are also at odds with those given by officials of a hotel that was the venue of dinner parties held on the eve of cherry blossom viewing gatherings. That disagreement has yet to be settled, too.

Abe has argued that no invoice was presented, and the fees were paid to the hotel by the individual participants.

However, in answering questions from an opposition lawmaker, officials said that their hotel has never failed to issue an invoice to the organizers of a party, and that it receives the fees in a lump sum from the organizers.

When questioned about the inconsistencies, Abe said his office approached the hotel for confirmation and learned that the hotel officials’ accounts were only intended as a “general argument.”

It was also found that Abe had added passages to the hotel’s explanation, such as “matters of business confidentiality.” The hotel denied any of its officials said such a thing.

One could be excused for suspecting that Abe embroidered his story to shore up his own argument.

When questioned by reporters afterward, Abe only brusquely reiterated that he had told everything to the Diet. When pressed by an opposition member in the Diet, Chief Cabinet Secretary Yoshihide Suga turned visibly angry and said that what Abe had said is right.

This is by no means the first time members of the Abe administration have tried desperately to justify themselves without reflecting upon themselves with modesty.

The reaction of the ruling Liberal Democratic Party to the hotel officials should not be overlooked, either.

Some LDP members have said their party should never use the hotel again. Hiroshi Moriyama, chairman of the LDP’s Diet Affairs Committee, took the trouble to tell reporters that a hotel official had visited LDP headquarters to say the hotel had “caused trouble” for the party.

That could be taken to show the LDP applied pressure to silence the hotel officials.

The problem does not end with the sakura viewing parties alone.

The administration recently decided to extend the mandatory retirement age for the head of the Tokyo High Public Prosecutors Office. A lawmaker, formerly of the LDP, has been arrested and indicted in a casino-related bribery scandal.

Little headway has been made in elucidating these and other problems surrounding the Abe administration.

But the administration and the ruling parties have fixed dates of Diet deliberations in hopes of passing the budget bill in the Lower House at an early date.

If things remain like this, the Diet will fail to fulfill its role as the legislative branch of government that should be holding the administrative branch in check.

The government officials’ slipshod Diet responses over the scandals should never be allowed to be swept under the rug.