Chief of hospital in Wuhan: We are in the middle of the storm 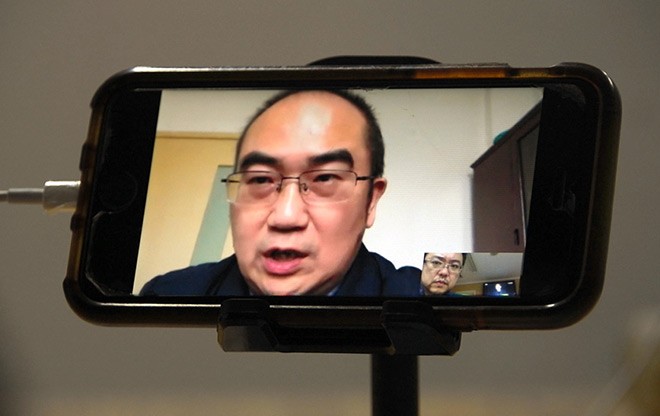 Zhang Dingyu, head of Jinintan Hospital in Wuhan, epicenter of the new coronavirus outbreak in China, gives an interview via video conference on Feb. 21. (Yoshikazu Hirai)

BEIJING--Hospital chief Zhang Dingyu didn’t think anything was abnormal when seven patients were admitted in late December with pneumonia. But within days, as patients kept pouring in, he told his medical staff to brace for the worst.

“We are in the middle of the storm,” he said.

His Jinintan Hospital is located in Wuhan, a Chinese city of 11 million people and the epicenter of the new coronavirus epidemic.

The hospital was established in 2016 as a key medical institution to fight infectious diseases, but even it was overwhelmed as the virus spread throughout the city.

Zhang explained the situation at the hospital in an interview with The Asahi Shimbun on Feb. 21 via video conference on social media. He said he believes the worst is now behind, and that an anti-HIV drug is effective in treating patients in the early stages of infection.

It was the first time for Zhang to talk to a foreign media organization. It is highly unusual for a senior medical authority in Wuhan to give an interview.

The hospital’s battle against COVID-19 began on Dec. 29 with the seven initial patients. The cause of their pneumonia was unknown, but they seemed to have been suffering from the same illness that had spread among those associated with Huanan Seafood Wholesale Market in Wuhan.

“Initially, I did not think that the disease was a very special case,” Zhang said.

However, he soon noticed that unlike common pneumonia, the patients with this disease were coughing without phlegm and had breathing difficulties.

Patients with common pneumonia normally have problems breathing after their symptoms become severe.

Over the following days, the number of patients surged, and the central government dispatched a team of infectious-disease specialists to the hospital.

“At that stage, I realized that the situation (in Wuhan) was a matter of grave concern,” Zhang said.

In early January, Zhang expanded the hospital’s ability to respond to patients and told staff members to prepare for the “storm.”

On Jan. 23, Wuhan was locked down, with no access to and from the outside.

The hospital’s stockpile of medical supplies was dwindling and the atmosphere became tense.

With a shortage of masks and protective gear, doctors had to reduce their visits to patients in the treatment area to only twice or thrice a day.

Zhang said the doctors and nurses worked for more than 20 straight days at his hospital to treat hundreds of patients.

Doctors at the hospital started administering the anti-HIV drug soon after learning that it was effective in treating patients with COVID-19.

Zhang said he got the impression that the anti-HIV medicine would work only among patients in the early stages.

“My wife was infected by the virus, but she tested negative shortly after she was given the anti-HIV drug,” he said.

He said the anti-HIV drug was not effective in treating patients who had already developed severe symptoms. The doctors could only take stopgap measures, such as reducing the fevers, for these patients.

At one time, the hospital was treating more than 800 patients, but the number is now down to about 600, he said.

“As far as our hospital is concerned, the infection has already peaked out,” Zhang said.