Grandma learns Twitter to spread base opposition outside Okinawa 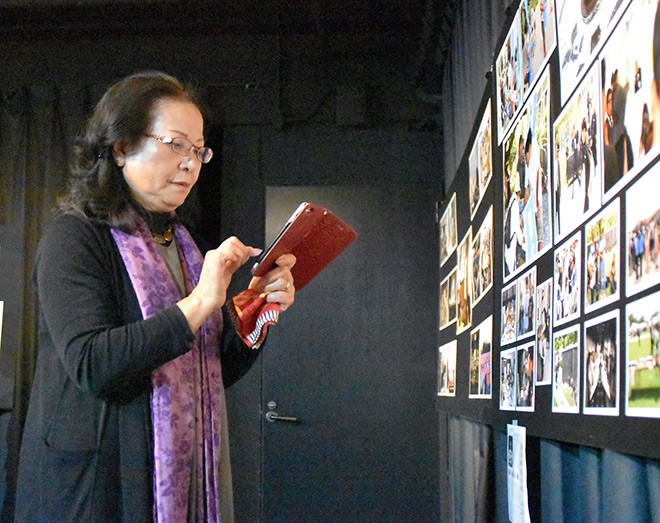 Tomoe Akamine tweets her thoughts on her smartphone at a photo exhibition in Naha marking the one-year anniversary of the Okinawa prefectural referendum on the Henoko project on Feb. 23. (Shinichi Fujiwara)

NAHA--Tomoe Akamine took two pieces of advice from her grandson on how to spread the word about the situation in Okinawa Prefecture: Use Twitter to send your message and ignore messages sent on Twitter.

At 66, Akamine still struggles with her smartphone to post on the social media service. But she has persisted in reaching out to as many people as possible through her tweets.

A staunch opponent of U.S. military bases stationed in Okinawa Prefecture, Akamine mainly tweets and retweets about the project to build a new facility in Nago in the prefecture that will take over the functions of the U.S. Marine Corps Air Station Futenma in Ginowan, also in the prefecture.

“Tomorrow marks the one-year anniversary of the prefectural referendum,” she said in a tweet posted on Feb. 23 when she was visiting a Naha exhibition of photos of the referendum. “I want to root for young people in Okinawa.”

The referendum held on Feb. 24 last year reaffirmed the prefecture’s opposition to the base relocation project. Seventy-two percent of the voters cast their ballots against the project.

Despite the overwhelming local objection, the central government has continued to push the project forward by reclaiming land in waters off the Henoko district of Nago.

Akamine’s weekly routine since 2014 includes joining a sit-in protest held near the gate of the U.S. military’s Camp Schwab, which is adjacent to planned new air station.

Akamine, a resident of Uruma, began tweeting in September 2018, after the cancer death of Takeshi Onaga, the Okinawa governor who was adamantly against the construction of the new U.S. military base.

Onaga had also strongly criticized people on the mainland and at one time accused them of “sneering at Okinawans and looking down on them.”

Akamine had previously taken little interest in social media. But after Onaga died, she took up a self-imposed mission to “get the mainlanders to learn the situation of Okinawa.”

One of her first tweets, posted after clumsily handling her smartphone, said, “Why don’t you come and join us at the gate?”

She posted that tweet to counter a baseless rumor circulating on the internet that people were being paid to join the protest.

That was one of the tamer critical responses she has received.

Akamine said some of the messages sent her way are so disturbing that she has trouble sleeping at night.

But she tries to remind herself of her grandson’s recommendation that she pay no attention to what is being said about her messages on Twitter.

Although many of her tweets are about the Henoko project, they are not all necessarily accusatory.

Akamine once tweeted when she and other demonstrators were surrounded by riot police who had been mobilized to remove them from the protest site.

“Young members of the riot police line up before us. They are also Okinawans. This is a difficult time for everyone,” she tweeted in a light-hearted manner.

But she said it is not easy at times to remain hopeful.

When protesters stood helplessly as a convoy of trucks loaded with construction equipment and materials entered Camp Schwab, she tweeted: “My heart is going to break. It is trying and agonizing.”

Still, her “follower” number is now in the triple digits, and she has received great encouragement from online friends even though she has never seen their faces.

Although the prospects to stop the base project remain bleak, Akamine tries not to be daunted by the central government’s high-handed approach.

“I am neither optimistic nor pessimistic,” she said.

One of the videos she uploaded shows demonstrators doing a signature Okinawan dance, a fixture in a celebratory event, outside Camp Schwab, a protest tactic that may seem odd to people outside Okinawa Prefecture.

“This is the way Okinawans fight. Okinawans fight with nonviolence,” Akamine tweeted. “Our fight near the gate of the U.S. military base comes with songs, dances and laughs.”

Another tweet said, “A civic movement is not sustainable with righteous indignation alone.”

Despite the uphill battle and the occasional obnoxious troll on Twitter, Akamine is committed to tweeting her messages in the coming years.

“I want to keep sending messages from a perspective of a grandmother and on behalf of the younger generation so that people across Japan will take the Henoko project seriously as their own issue,” she said.