Mini barrels for aging whiskeys and other distilled spirits are popular at bars and homes. (Video by Yoshinobu Matsunaga and Akihito Usui) 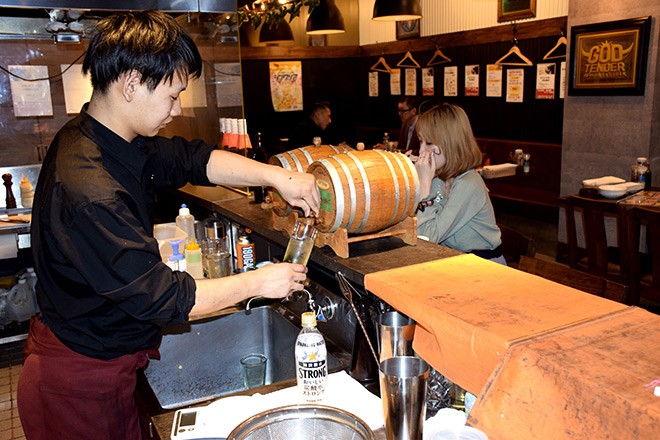 A bartender makes a highball using whiskey aged in a mini barrel at the Godtender bar-restaurant in Nagoya. (Akihito Usui)

NAGOYA--Mini barrels at bars and homes have become a popular source of inspiration and spirits for imbibers who want to be directly involved in the production process.

The drinkers say they are captivated by the subtle changes in the color and taste of their beverages during the aging process in the small wooden barrels.

Godtender, a bar-restaurant in the busy Sakae downtown area here, has two 5-liter wooden barrels on the counter.

Four different types of reasonably priced whiskey are blended before they are aged in the barrels for two months. The aged whiskey is used for highballs, a popular drink among female customers.

Godtender also keeps mini barrels for about 10 male patrons in their 40s and 50s who fill the containers with their favorite whiskey for aging.

“The aroma of the barrel is transferred to the spirit, moving it up a notch,” manager Ryuichi Yaga, 35, said. “There are endless ways to enjoy it, depending on the aging periods.”

The interior of the D-Geta bar in Toyohashi, also in Aichi Prefecture, is lined with at least 60 1-liter barrels that age whiskeys for patrons.

It is said that two weeks of aging in a mini barrel is equivalent to several years of aging in regular casks.

One patron visited the bar once a week for tasting and was elated to find that the liquor had aged to perfection after two months and one week in the mini barrel, according to manager Nobuhiro Ono, 43.

“The charm is that you create a new taste by putting extra effort in the finished beverage,” he said.

In Maibara, Shiga Prefecture, a 72-year-old company president keeps four barrels in a room at his home. They are filled with different types of shochu with an alcohol content of 25 percent. He became fascinated by aged shochu after he tried it about four years ago.

Although shochu is clear, it develops color and aroma through the aging process. The taste of the distilled spirit becomes milder after two to three months.

“I drink all kinds of alcohol, but what I love about aged shochu is that I can enjoy it as a unique beverage of my own design,” he said.

Drinking beverages from mini barrels is believed to have become popular in Europe in the 1970s.

Ily President Toshikazu Maruyama, 61, started selling mini barrels eight years ago.
He initially sold about 300 units a year, but the annual figure now exceeds 2,000, with individual customers accounting for half of the buyers.

“There are people who are seeking something different, something niche,” Maruyama said. “I think it is an irresistible desire for drinkers to get their hands on ‘the only liquor in the world.’”

Although Ily's mini barrels may be small, they are the real thing. They are made of white oak from North America, and the interior is charred over an open flame.

(This article was written by Yoshinobu Matsunaga and Akihito Usui.)